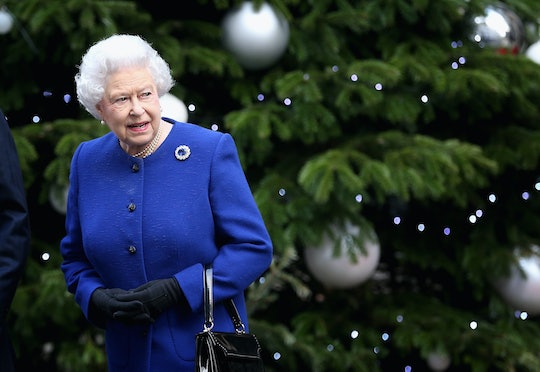 What kind of Christmas decorator are you? Are you one of those people who decks out every inch of your home, or would you rather get a little Charlie Brown tree and call it day? Given you have a staff to do the work, we all might be a little more of the former, which is probably why, when you look at the royal family’s Christmas decorations over the years, they are as regal and ornate as you’d expect them to be.

Of course, the queen isn’t limited to decorating just one space. Whether at Windsor Castle, where she spends most of her time, or at Sandringham, where the family spends the holidays, there are trees galore for visitors to enjoy. It takes about six months to plan the decorations, according to the Daily Mail, and a staff spends about three days putting in the work to decorate.

At Windsor, there are about 10 trees lining the halls where the public is welcome, plus a 60-foot spruce in St. George’s Hall that requires 2500 lights and 500 to 600 decorations, as the Daily Mail noted.

The indulgence is fitting since it was the royal family who introduced Christmas trees to Britain in the 19th century, according to Wales Online. It was Prince Albert, the consort of Queen Victoria, who popularized the décor within the castle. And over the years, they've really outdone themselves — here's a look:

This year the royal family’s Instagram account uploaded a video of the decorations at Buckingham Palace showing the delivery and setup of the three trees that adorn the Marble Hall. The massive trees are placed in white holders and decorated with white lights. This year, the decorations were all royal-themed, with small crowns taking center stage, according to Town & Country. A garland with fun multi-colored ornaments was also placed on the main staircase for visitors to enjoy.

In 2017, the royal family released a similar video again showing the décor at Buckingham palace. This time the trees were thick and beautiful Nordman firs that filled the space. The same garland festooned the stairway.

In Queen Elizabeth’s Christmas message, we got a look at the beautiful decorations on the tree in Sandringham — white and gold ornaments nestled among white lights on the massive tree.

In 2016, the world got a look at the celebration setup at Clarence House, the home of Prince Charles and Camilla Parker-Bowles, according to Hello! Magazine. Red and gold ornaments were hung alongside white lights to make the mood festive. For the queen’s address in 2016, she sat in front of a tree decked out with gold ornaments and red and white lights.

In 2015, The Telegraph got a look inside Windsor Castle where the queen had chosen a regency theme. The publication reported the choice was to coincide with a display at the Royal Collection Trust of the Battle of Waterloo, which would explain the small Napoleon ornaments. There were also golden bugles, tassels, and wreathes, as The Telegraph reported. For Sandringham, it was back to gold and white on the tree, in front of which the queen told the story of Albert and Victoria revolutionizing the Christmas tree in Britain.

In 2014, the royal family released a series of photos from the Royal Collection Trust showing the inside of Sandringham decorated for Christmas, according to the Daily Mail. Notable is the dining table which is set with gold place settings and centerpieces, and lots of candles. Greenery and red accents make for a festive Christmas look. Also included were photos of two trees: one resplendent in gold and red with white lights while thither is draped with purple ornaments, beads, and tinsel.

In 2013, the queen’s cousin, Lady Elizabeth Anson gave the Daily Mail an inside look at what happens at Sandringham for Christmas. She revealed that when the family all arrives at the estate on Christmas Eve, they all help to decorate the 20-foot Norfolk spruce tree that is the centerpiece of celebrations. It even features some ornaments from Queen Victoria’s era; little glass angels which “take pride of place.” That year, the tree was not heavily featured in the video of the queen’s speech but it can be glimpsed, with its white lights and blue ornaments.

Wherever they may be, the royal family’s Christmas decorations are lovely all the way around. Great appreciation is owed to their hardworking staff by everyone who enjoys them.