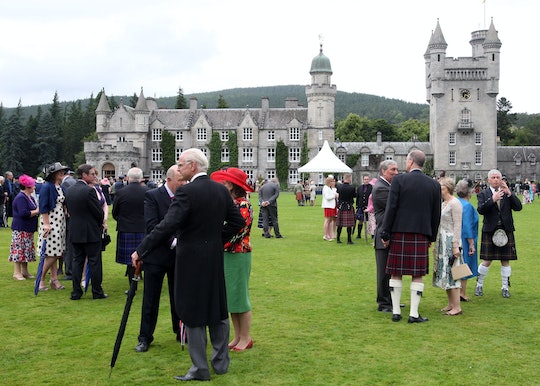 The Royal Family Has The Most Gorgeous Scottish Castle, Because Of Course They Do

While they've been around for centuries, here in America, the royal family is a little bit of a mystery still. Of course, most people know Queen Elizabeth II, Prince William, Prince Harry, and all the adorable royal kiddos, but everything else is pretty vague. For example, the royal family's Scottish castle, also known as Balmoral Castle, and how it even got into the royal family's possession, is pretty interesting.

Yes, members of the royal family practically all live in palaces most of the time, but that doesn't mean it's their only residence. The queen resides at Buckingham Palace with her husband, Prince Phillip. Prince William and his wife, Kate Middleton, and their three kids, Prince George, Princess Charlotte, and Prince Louis, all live in Kensington Palace. And newly married Prince Harry and Meghan Markle now reside at Kensington Palace as well.

But the royal family's Scottish castle is actually a summer escape, mainly for the Queen, it turns out. According to the official royal family website, "Every year The Queens spends the summer break at Balmoral, where she is joined by other members of The Royal Family." So, what's the deal with this castle?

The thing is, Balmoral Castle wasn't always in the royal family. As the official royal family website noted, "in 1852 Queen Victoria and Prince Albert bought the Castle outright," mainly because they discovered that the climate in that area of Scotland was better than what they were currently having in England. While the original castle was built in 1390, according to Town & Country, the royal family started on some renovations when they acquired the property. Per Town & Country,

The new structure was completed in 1856, and the other building was torn down. Now, the 50,000-acre estate features 150 buildings in total.

So while the castle certainly is old and historic, it isn't quite as old as the original structure. But it's likely pretty sentimental to the royal family, still. After all, it was Queen Victoria and Prince Albert who bought the property in the first place, and their renovations on it were definitely a labor of love. Per the royal family website, "In 1861 the main farmhouse and buildings were finished, with plans drawn up by Prince Albert for a new dairy along the lines of the one at Windsor," but unfortunately, Prince Albert died before the work was done.

So it was Queen Victoria who completed the renovations, and then, "When Queen Victoria died in 1901 Balmoral passed to King Edward VII," per the royal family website. After King Edward VII, the residence was passed on to King George V, and then on down to King George VI, who visited the castle quite a bit with his daughter, the now longest-reigning monarch in history, Queen Elizabeth. So clearly, the castle means a lot to the family.

In fact, Princess Eugenie, daughter of the Duke and Duchess of York, has opened up about Balmoral Castle before, in the documentary Our Queen At Ninety. According to Town & Country, Princess Eugenie explained,

I think Granny is the most happy there. I think she really, really loves the Highlands. Walks, picnics, dogs—a lot of dogs, there's always dogs—and people coming in and out all the time. It's a lovely base for Granny and Grandpa, for us to come and see them up there, where you just have room to breathe and run.

Clearly, it's a lovely summer escape.

And considering the fact that the queen prefers to spend a large part of her summers there, it makes sense that Balmoral Castle would be such an incredible place.