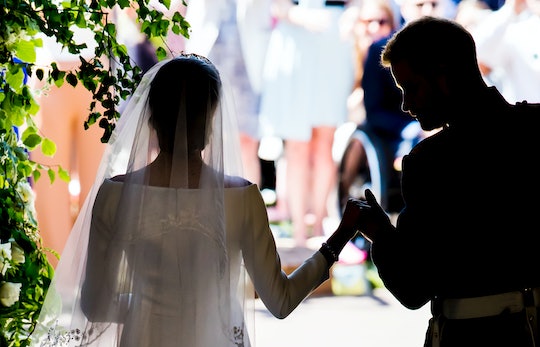 The Royal Wedding Was A Lot Like My Own Black Wedding

The entire world went to church on Saturday, at least those who tuned in to see Prince Harry wed black American former actress Meghan Markle. From the black sermon by Bishop Michael Curry, to the choir singing "Stand by Me," a song by Ben E. King, the Royal Wedding gave me flashbacks to my own black wedding in 2004.

Of course, my wedding didn't have the same budget as the royal wedding, obviously, and I did not have a designer dress made specially for me (David's Bridal off the rack, $99 sale!). And I was also much younger at 24, whereas Meghan and Prince Harry were married at 36 and 33, respectively. I'm sure they had a lot of input into their wedding and how they wanted things done. It appears as if Meghan truly got her dream wedding.

With the eyes of millions watching on their television screens across the world, Meghan stepped out of her car and, not to sound cliche, but into lots of people's hearts. She was stunning! She was beaming! She looked like a real-life Disney Princess. As everyone, including myself, anticipated a regular, traditional (boring) royal wedding, I was pleasantly surprised.

It is rare to see a black person's wedding so celebrated, especially when the wedding had so many black elements.

I also woke up early to watch Prince William and Kate Middleton's wedding back in April 2011, and it was a more traditional occasion from what I remember. Almost everything was done by the book, but no less interesting. I loved this couple and was so incredibly happy for both of them. As a kid, I had such a crush on Prince William! I even sent him and Harry a letter of condolence when their mother Princess Diana died in 1997. I was 16 years old and felt so terrible for them both. Not only did I look up to Diana, I couldn't imagine losing your mother, especially at such a young age. Unexpectedly, I received a thank you letter from the British consulate. I still have the letter.

I'm sure Meghan had dreams about what kind of wedding she wanted to have, perhaps traditional with a few of her own personalized touches. The fact that the royal family apparently allowed her to stray ever so slightly away from the "traditional" British royal wedding is astounding! And so many loved it, from those watching from home to the thousands of people on the street. When Meghan's carriage drove by, you could cheers resound from the crowd waiting for just a glimpse.

The news media had an even greater time covering the royal wedding. (Considering Harry is 6th in line to throne, one would think this wedding wouldn't have been such a humungous deal.) But this wedding was an even greater deal to the black community. It is rare to see a black person's wedding so celebrated, especially when the wedding had so many black elements. It was fun for me, being able to relate, with the long sermon and the beautiful rendition of "Stand by Me."

I'm assuming they'd never heard a black sermon before, or at least just didn't expect it during a royal wedding.

"Every once in a while in the midst of the madness you need a little fairy tale... the blackest and most beautiful and important moments of this wedding were so incredibly moving!" wrote Danielle Moodie-Mills when she shared the above photo on Instagram.

When Bishop Curry began his sermon, I was reminded of when my uncle Joseph, a minister, performed my marriage ceremony. During the wedding rehearsals, of course I knew he would say a prayer, some sort of words about how important love was and putting blessings over our union, and he did just that. I remember standing at the altar, looking at my soon-to-be husband Brayman, looking out into the audience and all of my family and friends and just wishing it to be over already! Keep in mind, I was 24 years old and I wasn't used to this kind of attention! Everyone's eyes were on us and I was just trying my best not to fall over, cry or throw up. I just wanted the "now pronounce you man and wife" or whatever to happen. I wanted to cry happy tears but I also didn't want to ruin my makeup!

During Prince Harry and Meghan's wedding, there were moments where I thought she was quietly screaming "Is this over yet?" Even as an actress, all of the attention must be daunting. Knowing that the entire world is probably watching your vows has to be at least a little nerve-wracking. Nevertheless, she stood there with poise, as Bishop Curry went on about how important love is. He quoted Dr. Martin Luther King Jr. and spoke of civil rights. As the camera panned the crowd inside of the cathedral, some looked perplexed. I'm assuming they'd never heard a black sermon before, or at least just didn't expect it during a royal wedding. Of course, everything he said was beautiful and poignant. Harry and Meghan exchanged looks of love as he continued on.

Looking at the comments from Twitter, some users were also confused. Some just wanted him to wrap it up. I'm sure every single thing he said was cleared with the British royal family before the ceremony, and perhaps even rehearsed in the days leading up to the ceremony. It was almost as if everyone was sitting through church in a black neighborhood on the south side of Chicago, where I'm from. Coincidentally, Meghan went to college in Chicago, to Northwestern University.

I'm sure it was very important to both Meghan and her mother that the ceremony was hers, as weddings traditionally focus on the bride. During my wedding, I had a reading done by one aunt, and "'Til There Was You" sung by another aunt. These were both my ideas and pretty confident that the song choice and choice of Reverend was Meghan's.

The attire was also mostly very British. As the guests filed in before the ceremony, all of the women had on fascinators, in which women usually wear to weddings and fancy events in England. But if you really think about it, they fascinators aren't too far off of what black women tend to wear to church on Sunday mornings. Especially Oprah's hat, which is reminiscent of a lot of hats I've seen Sunday mornings in church, attending with my grandmother. All of the women showed up in their Sunday best, like fancy dresses and hats they only wore to church services.

So as traditionally royal as Saturday's ceremony was, it was also pretty traditionally black. Hopefully this represents a change to the monarchy — not only allowing Harry to follow his heart and marry the woman that he seems to absolutely adore, but to allow other changes such as the diversity being added to centuries-old customs, and opening even more doors to acceptance. They have now shown a new modern take on British throne, and hopefully that sets an example for the rest of their country and the world.