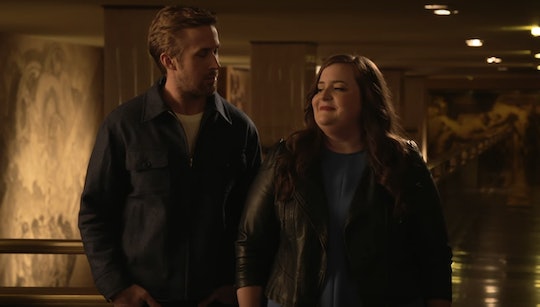 Clear your calendar on Dec. 5, seriously. Why, you may ask? Ryan Gosling, god of your male feminist Notebook dreams, is hosting Saturday Night Live that night. This will be Gosling's first time on the show, but he's already well established as a comedic figure (the "Feminist Ryan Gosling" meme took care of that), and more importantly, a heartthrob par excellence. To make sure you are adequately excited, the first SNL Ryan Gosling promo was released Thursday, and not going to lie, it's everything I'd hoped.

In the promo Gosling and SNL cast member Aidy Bryant are announcing the upcoming show when Aidy says, incredulously, "What does this card say? Ryan and Aidy kiss passionately for remainder of promo? Uh! These damn writers! But I guess we gotta do it!" She rolls her eyes and gets ready, smiling the whole time. Gosling calls her out for clearly writing the card, and she's embarrassed, but in a classic Gosling moment, he says, "But I like where your head's at. Let's bond." They walk away arm in arm.

The rest of the promo reads a lot like Gosling's "Hey Girl" memes. He asks Aidy, "Would you qualify this as a comfortable or uncomfortable silence?" When she says she can sit in silence till she's "damn dead," he says she's strong. She wishes more men called her strong. And isn't that what we all want? Isn't that the spirit of all Ryan Gosling memes? To reimagine him as the boyfriend we always wanted, calling women strong and independent and... I'm getting a little carried away here, but can you blame me?

They end the promo talking about Titanic, bench pressing, and "wailing on their pecs" because that's just how strong Aidy Bryant is. It's fantasy material, people. If this episode of SNL is anything like its promo, it's going to be great.

Watch the full promo below: