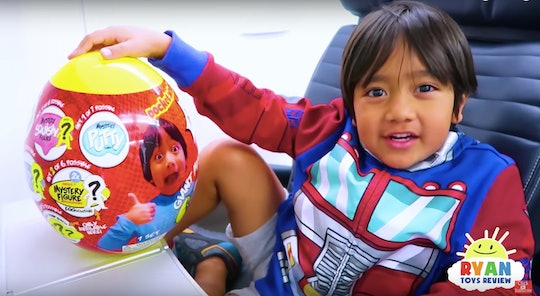 The holidays can be a mad scramble to get your hands on whatever tops your kids' wish list, before those toys disappear. You may not think of toys as things that easily sell out, but they definitely do. Parents, if you've been searching for an exclusive Christmas gift, check this out: the Ryan's World Giant Mystery egg is finally back in stock at Walmart. It won't last long, though!

Ryan, a 7-year-old toy reviewer from YouTube, has certainly carved out a path for himself. Don't believe it? He has 17 million followers on YouTube, according to the website, where he's drawn millions of views reviewing toys. His YouTube fame alone brings in over $11 million per year just based on the ads.

That's impressive for anybody, but especially for a kid who hasn't even graduated from elementary school yet.

Now, Ryan is a toy himself — not only that, he has a whole line of them. Ryan's World products can be found in Walmart, as reported by The Chicago Tribune, as the retailer is now the exclusive seller of some products from the line, including T-shirts and stuffed animals. The toys are distributed by Bonkers Toys.

Ryan has designed some pretty interesting toys, like an evil twin version of himself as a figurine. What kids are most excited about, though, is the elusive Ryan's World Giant Mystery Egg.

What is that, exactly?

It's a giant egg full of fun.

Ryan's Mystery Egg is filled with surprises, like an exclusive light and sounds vehicle (a spaceship, essentially), ultra-rare figures, special slime and putty, a limited edition squishy, plush, and more. According to i4u news, no two surprise eggs are the same, which is part of what makes them so appealing. It's easy to see why a toy like this flies off the shelves!

The toy is finally back in stock at Walmart for $34.82. But, it's not going to last long! According to Walmart's site at the time this article was published, there are only seven of Ryan's World Giant Mystery Eggs left. The toy is recommended for children between 3 to 6 years of age, as noted by Walmart's website.

This is a much better price than what Walmart had in the past. According to Good Housekeeping, after the product flew off the shelves on Black Friday, Walmart restocked Ryan's Mystery Egg at $94.29.

The eggs themselves are more than a foot tall, according to The Toy Insider, and it's actually a great way to sample all of the new Ryan's World products at once. According to the outlet, the egg's retail price is comparable to buying all of the items separately.

Even if your kid isn't familiar with Ryan's World, chances are they would love this toy. Having a giant egg is cool enough, but now it's packed full of toys? No kid can resist it.

These eggs are notorious for selling out quick, so don't feel too bad if you can't get your hands on one. They'll definitely be restocked in the future. Plus, Ryan's line of individual toys can still be found throughout the whole year.