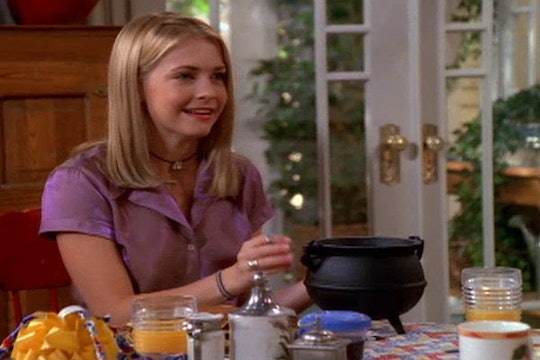 The 'Sabrina The Teenage Witch' Cast Reunited & It. Was. Magical.

It seems like these days it's all about the nostalgia, with photoshoots devoted to revisiting classic TV shows and remakes of beloved movies abounding. So it kind of felt like it was only a matter of time until the cast of Sabrina the Teenage Witch reunited, but that doesn't make the fact that it happened any less — please forgive me for the pun — magical. Cast members from every season joined forces for the very first time at L.A. Comic Con for a panel discussion that even provided some theories about what their characters would be up to in the present day.

Star Melissa Joan Hart documented the reunion on her Instagram account, posing for pictures with Nate Richert (the dreamy Harvey Kinkle), Caroline Rhea and Beth Broderick (Aunts Hilda and Zelda, respectively), Soleil Moon Frye and Elisa Donovan (college roomies Roxie and Morgan), David Lascher (Josh, the barista with boyfriend aspirations), Alimi Ballard (Quizmaster Albert, who helped Sabrina get her witch's license), and Nick Bakay (the voice of Salem). Some characters didn't make an appearance, like Sabrina's former besties Jenny and Valerie or Libby, the school bully with a knee sock addiction, but it was still amazing to see so many actors from the show in the same place again.

Fans can rest assured that as far as Richert was concerned, Harvey and Sabrina would be happily married to this day with their own family. Hart speculated that they could have even started their very own Hogwarts for kids just like Sabrina. "Started our own little witch school, maybe foster some children that are part mortal, part witch, and [teach them] how to navigate that world," she said. Sounds like the perfect plan.

However, the rest of the Spellman family might not be living the dream that titular witch Sabrina could be. Broderick apparently thought Zelda would have turned into an Other Realm Uber driver, while Rhea believed Hilda was holed up with Salem and pining for her lost love Drell. Side note: spending eternity with sassy Salem definitely seems like a better fate than Drell. Bakay, on the other hand, thought Salem was doing alright, saying he was, "still consigned to being a cat for trying to take over the world. I think he's into Soduku. I htink he's into role playing, the whole thing."

Several cast members also mentioned that they would be down for a revival, which unfortunately seems unlikely due to the upcoming CW reboot that will take its inspiration from the creepy comic series The Chilling Adventures of Sabrina. Broderick said that she would take part in a revival "in a heartbeat if we could. We're family. I was really excited just to come and see these girls." Hart was similarly down for the idea, saying that she would return to the Sabrina set tomorrow if it was possible.

No one from the original series appears to be at all involved in the reboot, though during the panel a few actors expressed trepidation about the new, dark take on the character. Rhea feared it might tarnish Sabrina's legacy, and Donovan and Frye agreed while praising the original show. Donovan said, "Our version was family friendly. It's magical, it's female driven Everybody can watch it. It's smart and it's witty, and I feel really good about that. I keep saying that, but I really mean it." Others, however, like Richert and Broderick, were intrigued by the new take.

Perhaps the upcoming revival could find a way to integrate cast members and characters from the original show, but if not, another reunion or two would be a welcome way of getting the cast together again.