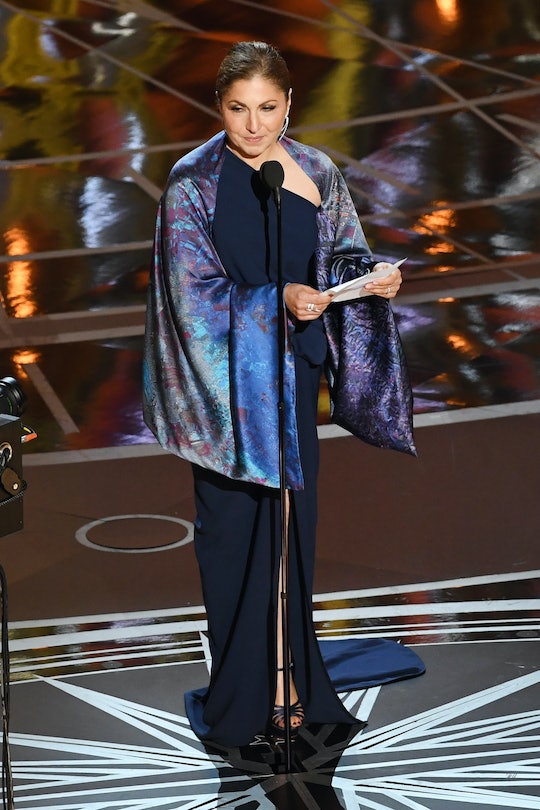 While many Hollywood actors chose to don ribbons and pins to protest the current political situation in America, President Trump's policies had an an even more tangible effect on the 2017 Oscars, one that largely went unseen until it came time to distribute the awards. Anousheh Ansari, the first female astronaut from the private sector send to space and Firouz Naderi, a former director at NASA to accept the Best Foreign Film award on Sunday night in the name of the film's director, Asghar Farhadi. By far, The Salesman director's statement at the Oscars, which referenced Trump's controversial refugee ban, was one of the most powerful speeches of the evening. And it wasn't even the director who gave it.

The director, Farhadi, who is Iranian, originally planned to attend the ceremony and travel to the United States in an effort to shine some light on "the unjust circumstances that have arisen for the immigrants and travellers of several countries to the United States." But the 44-year-old director decided to stay put instead, since he believed that the conditions to get a travel visa to enter the United States were unacceptable.

Instead, he asked Ansari, who was the first Iranian woman to go into space, to accept the award on his behalf. She did not mince her friend's words when it came to speaking out about the current American administration's plans to restrict immigration and travel to the United States.

It was the second time that Farhadi had been nominated. Ansari said on his behalf that his absence was out of respect for everyone who has been barred entry to the United States due to what he believes is an "inhumane law that bans entry of immigrants to the U.S."

On Sunday, while Hollywood's elite was getting their makeup done and picking out what accessories to wear on the red carpet, around 10,000 people gathered in London's Trafalgar Square to protest alongside Farhadi. He told reporters, “This solidarity is off to a great start. I hope this movement will continue and spread for it has within itself the power to stand up to fascism, be victorious in the face of extremism and say no to oppressive political powers everywhere.”

He told The Guardian in an interview, along with London mayor Sadiq Khan, "We are all citizens of the world and I will endeavor to protect and spread this unity."

The full text of Farhadi's Oscars statement from Sunday night, as compiled by Vox, can be read below:

It's a great honor to be receiving this valuable award for the second time. I would like to thank the members of the academy, my crew in Iran, my producer, Amazon, and my fellow nominees.

I'm sorry I'm not with you tonight. My absence is out of respect for the people of my country and those of other six nations whom have been disrespected by the inhuman law that bans entry of immigrants to the US. Dividing the world into the “us" and "our enemies" categories creates fear. A deceitful justification for aggression and war. These wars prevent democracy and human rights in countries which have themselves been victims of aggression. Filmmakers can turn their cameras to capture shared human qualities and break stereotypes of various nationalities and religions. They create empathy between us and others. An empathy which we need today more than ever.

Although he wasn't there to accept his award, Farhadi's message was hopefully heard by the attendees at the ceremony and anyone at home watching wondering why the director wasn't able to bring himself to show up to accept his award.