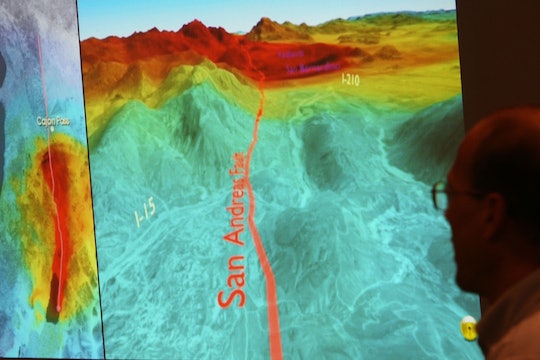 The San Andreas Fault Is Moving, But You Probably Shouldn't Panic Yet

Even those who aren't particularly interested in seismology have likely heard of the San Andreas fault line (probably, in some cases, because of the movie starring Dwayne "The Rock" Johnson that used it for its title). The fault runs almost the entire length of California, and scientists study it ceaselessly, worried about its potential to unleash a terrible earthquake. Now, GPS technology has revealed that the San Andreas fault is moving. So should you start packing and panicking? Not just yet.

A team of scientists published the new findings in Nature Geoscience, confirming theories that had long been predicted in models but not actually validated with hard data until now. Their basic discovery was of a vertical motion pattern surrounding the fault, through "lobes" that move a few millimeters every year. These lobes, which are around 125 miles wide, show a pattern of uplift and caving in on either side of the fault line.

That sounds pretty scary, but as the scientists say in their letter in the journal:

Understanding this critical component of interseismic deformation at a complex strike–slip plate boundary will better constrain regional mechanics and crustal rheology, improving the quantification of seismic hazards in southern California and beyond.

Or, in slightly more understandable terms, this new information could actually be a good thing, given that it will help scientists better determine future risks. And actually, this isn't sudden, new motion. This GPS data has been available for years. It's just that scientists weren't able to remove the noise from it until now.

Plus, it turns out that, although it's the most well-known fault line, the San Andreas may not actually be the fault to worry about. In a 2015 New Yorker article titled "The Really Big One" that caused considerable worry upon publication and subsequently won a Pulitzer Prize, writer Kathryn Schultz dismissed rumors that the San Andreas fault line would cause an earthquake of devastating, record-setting proportions, saying:

That rumor is misleading, no matter what the San Andreas ever does. Every fault line has an upper limit to its potency, determined by its length and width, and by how far it can slip. For the San Andreas, one of the most extensively studied and best understood fault lines in the world, that upper limit is roughly an 8.2—a powerful earthquake, but, because the Richter scale is logarithmic, only six per cent as strong as the 2011 event in Japan.

(The Japan event was a magnitude 9.0 earthquake that, coupled with the tsunami it caused, killed 18,000 people.)

Schultz argued that the earthquake to actually worry about was one a little to the north, called the Cascadia subduction zone. If you're feeling cheated out of the panicking you were planning on doing when you heard that San Andreas was moving, read the whole article about Cascadia. There's panic in spades to be had there.

But for now, take a bit of solace in the fact that scientists are ever hard at work in figuring out everything they can about earthquakes, so that we can minimize damage as much as possible.