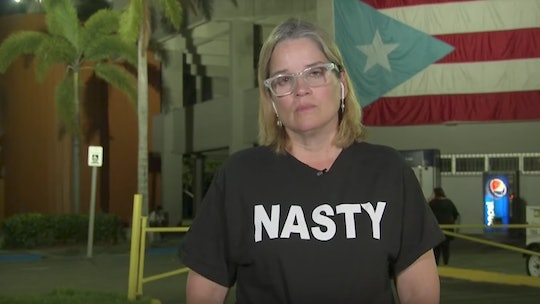 In the face of a crisis, the mayor of San Juan, Puerto Rico, Carmen Yulín Cruz, has been an example of an incredibly powerful leader. But President Donald Trump tends to disagree. Over the weekend, he criticized Yulín Cruz's calls for help from the government "nasty." And, in turn, just a few days later, during a televised interview, the San Juan mayor wore a "nasty" T-shirt and the message to Trump was beyond clear — Yulín Cruz will not be phased by his words.

Since Hurricane Maria caused devastation to the island of Puerto Rico, killing 34 and still leaving millions without power and clean drinking water. Many believe that the response from the United States has been delayed and much of Puerto Rico has gone ignored. Because of this, the mayor of San Juan, Puerto Rico's capital, had been understandably upset about the lacking response from the White House.

In typical Trump fashion, instead of accepting the criticism from Yulín Cruz and offering his help, Trump fought back, calling Yulín Cruz's leadership "poor" in a tweet on Saturday. "The Mayor of San Juan, who was very complimentary only a few days ago, has now been told by the Democrats that you must be nasty to Trump," Trump tweeted.

But just a few days later, Yulín Cruz showed that she was not going to be phased or affected by Trump's comments. On Wednesday, during an interview with Univision, Yulín Cruz owned her nastiness, donning a T-shirt with a message that would be hard for even Trump to miss.

But her shirt wasn't the only important thing worth noting during her interview. Yulín Cruz had a pretty important message to Trump regarding his visit to Puerto Rico on Tuesday. Yulín Cruz said during the interview, according to Mashable:

When someone is annoyed by someone claiming lack of drinking water, lack of medicine for the sick, and lack of food for the hungry, that person has problems too severe to be explained in an interview. What is really nasty is that anyone would want to turn their back on the Puerto Rican people.

Trump's visit to Puerto Rico has been more or less labeled as a train wreck. During his visit on Tuesday, the president complained about how much money the United States has spent on Puerto Rico, according to CNN, and compared the death toll of Hurricane Maria to another devastating hurricane that happened a decade ago. In one video from his visit, Trump threw paper towels into a crowd of people in desperate need of supplies like it was some kind of game for him.

Over 90 percent of the 3.5 million people in Puerto Rico are still without power, according to the BBC. The amount of loss that these people have suffered from shouldn't have been a joke at the expense of Trump. Yet, that is how it came across to some people during his visit.

But Yulín Cruz's care for the people of San Juan and all of Puerto Rico has shown to be a sharp contrast to Trump. Her dedication to bringing attention and help to Puerto Rico is something to admire. In every interview she gives, Yulín Cruz finds a way to ask for help and be honest with viewers at home.

Wearing this T-shirt is no different. By wearing a shirt that says "nasty" Yulín Cruz is not only reflecting the president's words back at him, she is taking ownership of every one of her actions — which is exactly what Yulín Cruz wanted Trump to know on Tuesday.

During an interview with CNN, Yulín Cruz said that she wanted the president to think about the impact his words (like nasty) before speaking. "But I would hope that the President of the United States stops spouting out comments that really hurt the people of Puerto Rico because rather than the commander in chief he becomes the miscommunicator in chief," Yulín Cruz said, according to CNN.

This isn't the first time that Trump has called a woman in power "nasty" and it more than likely won't be the last. Luckily, both of those women knew how to flip a negative message and turn it into an empowering one. Yulín Cruz has every right to own the word and that's exactly what she did.