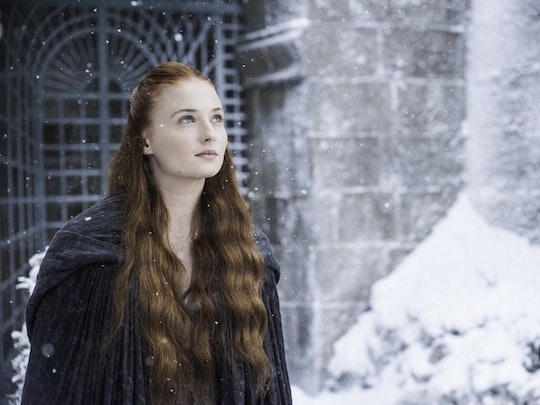 The Sansa Stark Rape Outrage Forced 'Game of Thrones' To Make Some Changes, But Is That A Good Thing?

Last season, there was one scene in Game of Thrones that got everyone talking: the rape of Sansa Stark (played by Sophie Turner). Many fans were enraged by the brutality of it, celebrities and politicians spoke up against it, and countless individuals vowed to walk away from the series not because of how the rape was portrayed, but because the scene took place at all. Yet just when you thought executives weren’t listening, rest assured: The shows producers heard you. According to director Jeremy Podeswa, who is helming the first two episodes of season six, creators Dan Weiss and David Benioff have confirmed "a couple of things [have] changed as a result" of Sansa’s rape, and the ongoing discussions.

You see, when episode 6 (of season 5) aired, I knew it would be difficult. While I didn’t know what would happen, knowing Sansa was slated to marry the psychotic Ramsay Bolton was enough. When the rape happened, my mouth hung open — and it stayed that way well after the credits rolled. I was sickened and disgusted, and my knee-jerk reaction was to pull away. (After all, rape isn’t a plot device, and I hated the idea that it was being used as such.)

But then I stopped to think about it all. I considered the scene and their characters — Sansa and Ramsey — I considered the state of the realm and the cultural conditions they lived in, and I began to believe the scene was just what was needed. It was tragic and terrible, but it was important. It had a purpose, and the potential to be more than just “gratuitous rape.”

From a show standpoint, everyone who has watched — or read — GoT knows Ramsey is insane. He is crude, unorthodox, offensive, and downright barbarous. It would have been uncharacteristic if, after the wedding, he showed Sansa love or compassion or even an ounce of respect. (And, as anyone who has read the books knows, Jeyne Pool — Ramsay’s bride in George R.R. Martin’s series, whose place Sansa has taken — does get sexually assaulted.) It has been implied the rape sequence served no purpose, and destroyed Sansa’s character, but since that scene aired just a few episodes ago, we have no idea what purpose this scene may have or could have served.

From a cultural standpoint, the idea of portraying rape — of depicting it on television — is offensive. And it should be. There is nothing entertaining about rape, and whether it is real or fictional, it should upset us. It should anger us. It should make us uncomfortable. And even though many fans saw “the scene” coming, most of us hoped for some sort of last minute rescue. When that didn’t happen people became upset. But, IMO, what upset us more wasn’t that Sansa — a television character — couldn’t avoid rape, but that it is a reality many women face.

Game of Thrones mirrored a truth many people didn’t want to face — many people couldn’t face — and so they collectively complained, or they turned away. Because the truth is this: regardless of the reasoning, why Sansa was raped doesn’t matter. People are trying to make sense of something that, in reality, does not make sense. People want context and purpose and reasoning because, well, television, but rape rarely provides any of those things.

Vanity Fair argued that Sansa’s “rape scene undercuts all the agency that’s been growing in Sansa since the end of last season,” and fans have argued that the scene was “unbefitting [of] the strong female character” but when does rape come at a “good time"? When does rape happen to the “right person?” When is rape OK?

The answer: Never. And it's important that Sansa's rape made fans feel that. The outrage was important for the show, but also for our culture.

So while I applaud the producers, directors, and creators of GoT for listening to the outrage from their fans, I think whether or not this change is “good” or “valid” remains to be seen.