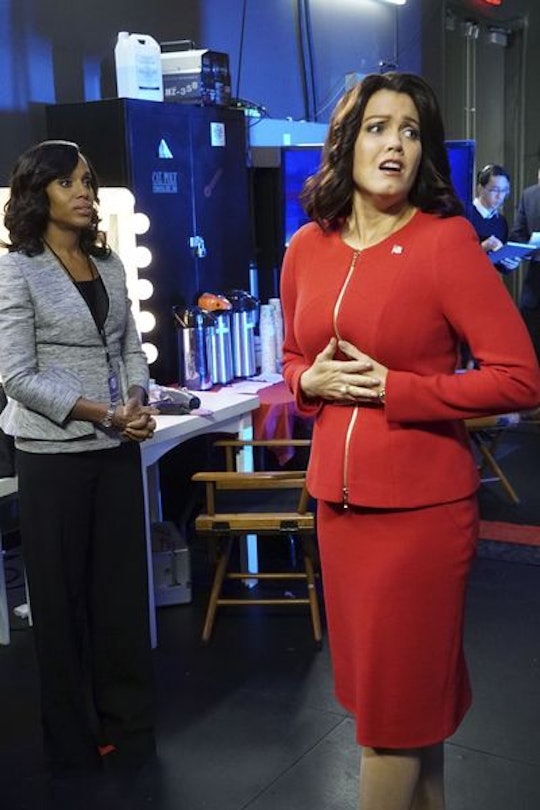 On Thursday's episode of Scandal, Mellie's popularity — and self-esteem — took a bit of a nose dive. Her opponent, Susan Ross, won a Republican debate which drove her ahead in the polls. This led Mellie to believe that "America hates her." Olivia attempted to play dirty to solve this situation, and try to leak Susan's secrets to get Mellie ahead. Another gladiator, however, took a different approach. Marcus convinced Mellie to go on Jimmy Kimmel Live and participate in Scandal meets Jimmy Kimmel "Celebrities Read Mean Tweets" segment.

At first, Mellie did not want to go through with it. This is pretty typical of her — of course she would not want to read tweets from people who hate her. This prompted Marcus to yell at her and not only tell her how unlikeable she is, but that she would never be president. By the end of the episode, thankfully, Mellie decided to roll with it. Marcus asserted that she needed to be able to make fun of herself, so that's what she did.

Mellie went on Kimmel to show a side "America can fall in love with." Kimmel introduced her, and she began rattling off mean Tweets about herself and her relationship with Fitz.

Not only did Mellie read them with humility and grace, the tweets themselves were pretty hilarious. The crowd on the Kimmel's audience loved it, as did actual Scandal fans on Twitter:

It's likely that the tweets she read out loud were made up, but they read like Kimmel took them from straight from the site. The parody was extremely spot on, from the content of the tweets, to Mellie's reading of them, to the audience eating it up.

Hopefully this is a sign that Mellie will start to lighten up; it can only help her campaign, and will add some pretty memorable scenes to the show. By doing this, as Marcus said, she showed America that she does have a likable side — even when people are insulting her and her marriage.

Campaign tactics like these are certainly more fun to see on Scandal than what Olivia thought of on Thursday's episode: taking down Susan Ross by revealing that her ex and father of her daughter is in prison. Perhaps as the election progresses, more candidates can make a surprise Kimmel appearance and read "Mean Tweet." If it was as perfect as Mellie's, it will be worth the wait.