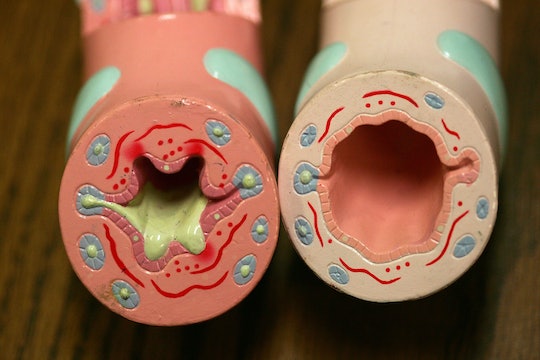 The Science Behind Asthma Attacks

Asthma, the most common chronic disease in children, is on the rise in the United States and doctors aren’t exactly sure why. The latest statistics put the prevalence of asthma in kids at about one in 10 — up from 1 in 14 in 2001 — and it’s the third leading cause of hospitalizations in children, according to the American Lung Association. But with the right information, parents and kids can successfully manage the disease. For example, since attacks can come on quickly and go from mild to serious in little time, understanding the science behind asthma attacks can help parents keep their cool in a potentially dangerous scenario. That’s important because asthma can be really terrifying to witness.

The American Lung Association describes it as an ailment that makes it harder to move air in and out of the lungs. On its website, the ALA explains how asthma works by comparing the lining of the lungs to the skin on our bodies. Just like some people have more sensitive skin than others, some have more sensitive pulmonary airways than others. And when exposed to certain triggers — the common cold, stress, weather changes dust, smoke or pet dander, for example — the lining gets red and swollen, like the skin on our bodies when exposed to too much sun.

So what happens during an asthma attack, exactly? Here’s where things get a bit more frightening. Once an asthmatic is exposed to a trigger in the environment, the muscles around those airways suddenly tighten. At the same time, the lining of those passages starts to swell up and produce a higher-than-normal amount of mucus, making even less space for air to pass through. Taken together, the sudden onset of muscle spasms, coughing or wheezing, and shortness of breath are the hallmark symptoms of an asthma “attack,” according to WebMD.

Those facts cover the mechanics of an asthma flare-up, but for anyone who’s ever witnessed an asthma attack — or suffered through one themselves — the scientific explanation doesn’t quite compare to the reality. San Diego respiratory therapist Theresa Cannizzaro described what asthma feels like according to actual asthma sufferers in a column for Asthma.net:

"Fish out of water" [...] is a pretty common answer I hear when I ask asthmatics what it feels like. Think of if you were suddenly submerged in water and trying to breathe. Impossible to do. It is a terrible suffocating feeling.

Cannizzaro explained that, while no two people used exactly the same words to describe the coughing, wheezing, and chest tightening of an an asthma flare-up, many of her patients said it feels “literally like there is an elephant sitting on your chest” and “like there is a pillow being held over my face.”

The good news is that, though asthma might require lifelong management, it is manageable. With proper treatment and medical support, most experts agree that people who suffer from asthma can have healthy lives. The key is to recognize the signs of an asthma attack and get medical help quickly in order to protect the lungs from too much inflammation damage.

Simply put, the next time your child experiences the symptoms of an asthma attack, treat them swiftly and efficiently — because not only is the biology of the attack terrible itself, the mental stress it can cause is just as scary.