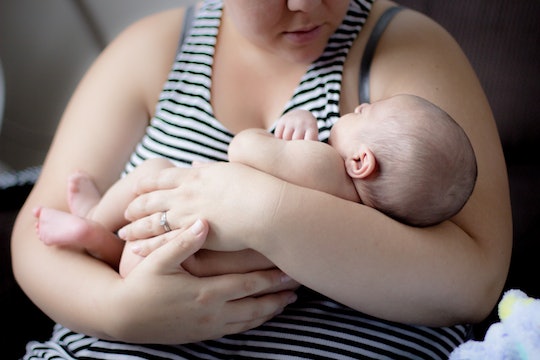 The Science Behind The “Pump & Dump” Myth

One thing you realize pretty quickly after getting pregnant is that there are an awful lot of things you're told to give up. Sushi, unpasteurized cheese, deli meat, caffeine, and certain medications can all potentially cause problems for your growing child, and certain habits — like drinking or smoking — can have serious effects on a baby's development. The long-held popular opinion about alcohol was that breastfeeding women should avoid it, too, and if they do have a glass of wine or two, they should pump out the alcohol-laden breastmilk after drinking to avoid passing it on to their child. But the science behind the "pump & dump" myth makes it clear that, well, there's really no need to do that at all. That's because while alcohol does pass into breastmilk easily, it doesn't just collect there until it's pumped out.

According to Slate, alcohol passes into breastmilk at roughly the same concentration as it does in blood. That means that when you have a drink, and your blood alcohol content increases — peaking approximately 30-45 minutes later — the alcohol content in your milk is at more or less the same level. Both the alcohol in your blood and the alcohol in your breastmilk then begin to decrease as you return back to your normal sober state, meaning that if you wait long enough to pump after drinking, there's no reason whatsoever to throw it out.

So how do you know how long to wait? It depends. According to the Mayo Clinic, it takes about two to three hours for 12 ounces of 5 percent beer to clear your system, and roughly the same among of time for 5 ounces of 11 percent wine or 1.5 ounces of 40 percent liquor. That will differ though depending on body weight, so if you want a more specific guideline, the Motherisk program at The Hospital For Sick Children in Toronto, Canada, offers mothers a table to help determine approximately how long it will take for alcohol to be eliminated from breastmilk.

The table measures the amount of time it takes for alcohol to clear breastmilk from the point at which a woman starts drinking based on weight and the number of drinks she's had, using the average rate of alcohol metabolism for someone who is average height. For example, it takes the average 140-pound woman about 4 hours and 38 minutes to clear two 5-ounce glasses of wine, so a breastfeeding mom who starts drinking at 8:00 p.m. Friday night should wait until at least 12:38 a.m. before breastfeeding her baby.

That doesn't mean you need to completely freak out if you happened to breastfeed your child at 10:30 p.m. though. While alcohol does pass easily into breastmilk, only a relative small amount of what mom actually drinks would get passed on to baby. According to Slate, even if a 150-pound woman were to drink four glasses of wine and then breastfeed her 13-pound baby about 4 ounces of milk when her blood alcohol level has spiked half an hour later, "her baby will end up with a blood alcohol concentration of 0.0038 percent," or roughly what the same 150-pound woman's blood alcohol level would be after drinking only about one-eight of a 12-ounce light beer.

Of course, there are other things to consider when deciding whether or not to drink when nursing. Firstly, there is no established "safe" amount of alcohol in breastmilk, according to the Mayo Clinic, so breastfeeding your child after drinking isn't risk-free, even if you wait. Then there's the fact that co-sleeping with your child after drinking can also be dangerous, and that you are also more likely to accidentally hurt your child (by dropping them, or falling while holding them, for example), if you have alcohol in your system, according to Slate.

For all moms who have lamented the loss of what could have been otherwise perfectly good breastmilk as a result of a date night pump and dump, the good news is that you will no longer need to waste that liquid gold. But pumping and dumping isn't completely without value: having to hold off on nursing for hours isn't exactly comfortable, so if you know you have to wait long enough that engorgement is going to be a problem, pumping and dumping will probably help a lot.