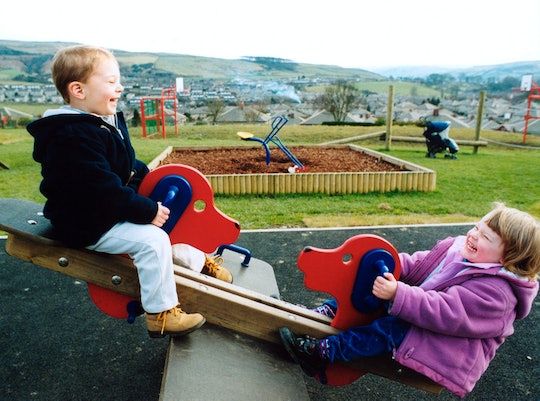 Kids can laugh themselves right off the chair. Photofusion/Getty Images

Survival Of The Giggliest: Why Your Kid Laughs So Hard They Cry

Sometimes the toddler who won’t put on their shoes isn’t in the throes of a tantrum — rather, their limp body might have fallen victim to the tantrum’s shadow brother: the giggle fit, rendering them incapable of functioning, even if they wanted to.

It typically starts with a shy smile, and maybe a trigger word (“poop”), followed by a few small hints of a giggle before things transform into full-blown hysterics — cackling, involuntary farts, loss of voice, happy tears, and finally the toddler in a mushy pile on the floor, exhausted and out of breath from his efforts.

Laughing is indeed a sign of intelligence in children, as well as in adults. (Here we turn to the literary greats for insight: “Watch the humorless closely: the cocked and furtive way they monitor all conversation, their flashes of panic as irony or exaggeration eludes them, the relief with which they submit to the meaningless babble of unanimous laughter,” wrote British novelist Martin Amis.) A good giggle can cure ennui and sometimes tack a child away from a tantrum before the point of no return.

But why do toddlers have these giggle fits? And are they always to be celebrated? We spoke with pediatricians and therapists for insight on our favorite medical subject: the funny bone.

What causes the giggle fit?

While Julia Louis-Dreyfus was renowned for her giggle fits on Seinfeld, which often cascaded into a full-cast meltdown, adults tend not to lose control of all their bodily functions in the way that children do, says Louis Franzini, Ph.D., clinical psychologist in Ponte Vedra, Florida, and author of Kids Who Laugh.

“Kids are prone to these attacks because many everyday things can stimulate their laughing as they learn about the world,” Franzini says. So, simple sounds may trigger laughter when they’re babies. Knock-knock jokes can spiral into full-blown laughing fits, Franzini says.

Babies typically will laugh for the first time at 4 months of age, and it could be due to anything from a surprise to a quick bounce on the knee. Essentially, Franzini says, they’re laughing at anything out of the ordinary (that’s why a game of peek-a-boo can be so unanimously hysterical).

A few years ago, Caspar Addyman of University of London set out to study baby laughter, examining more than 1,000 families worldwide. The research found that babies tend to laugh with other people at what those people are doing — so simply tickling a child won’t send that child into a massive giggle-fit, nor will making a funny sound. Essentially, those laughter fits are a result of a social trigger.

You may not think that you’re the funniest person in the room, but to your child, you’re a comedian. And the role of laughter and performance in the developing parent-child relationship is not only special, but very important. From the time they’re an infant, your child relies on you to provide humor cues, according to a recent study. Infants will smile longer when they’re 5-6 months, and more often at 7 months when parents provide humor cues, the study found.

You don’t even have to provide anything traditionally funny to make your child laugh, so no pressure. Ian Wilkie, a lecturer in performance at the University of Salford in Manchester, has written that interactions between mom and child contain the “proto-comic performance interplay.” In other words, you already have all the ingredients of comedy: surprise, incongruity (what Dr. Harvey Karp would call “playing the boob”). Kids will even laugh at familiar faces, as laughter is evidence of familiarity and bonding.

Connections To An Absence Of Laughter

Children — like adults — laugh at different things, and some laugh more than others, which is totally normal. But if a child doesn’t laugh at all, this could be a problem. A small 2017 study out of University College London looked at the MRI of boys ages 11 to 16 who were exposed to the sounds of fake and real laughter, along with crying. Those who had risk factors for psychopathy had reduced brain activity in the regions associated with emotional reasoning, and were less likely to laugh when others laughed.

“The absence of laughing can be telltale signs of psychiatric issues later on,” says Adina Mahalli, a certified mental health consultant and family care specialist with Maple Holistics in New Jersey.

Every child will find different things funny, however, so don’t jump to conclusions if your child has a difference sense of humor than his friends.

Laughing can also be difficult physically if the child has asthma, cystic fibrosis, or another severe respiratory condition, Franzini says. A study by the American Thoracic Society found that more than half of people with asthma report their symptoms are brought on by laughter. The reason? It’s not exactly understood, but it could involve hyperventilating. If your child’s asthma is controlled, you can laugh longer without getting asthma symptoms, so the study suggests that laughter-induced asthma may be a sign that the asthma isn’t controlled.

In rare cases, giggle fits turn out to be caused by gelastic epilepsy, which can usually be fixed via open-brain surgery. But for the most part, they are nothing to worry about.

“These bursts of laughter induce happy feelings and lighten the mood, as long as they don’t escalate to an unhealthy point,” Mahalli says. “This is mainly the case when nothing seemingly funny is occurring, or no one else is laughing.”

Take "nothing seemingly funny" with a grain of salt when dealing with toddlers dazzled by their own feet.

If the only issue is how hard they laugh at Olaf, enjoy it.

As long as everything seems normal — your baby starts to giggle around 4 months, and will even laugh in his sleep around 9 months, followed by a serious case of the giggles around 12 months, and eventually cackling on Ellen — then be sure to embrace that giggle.