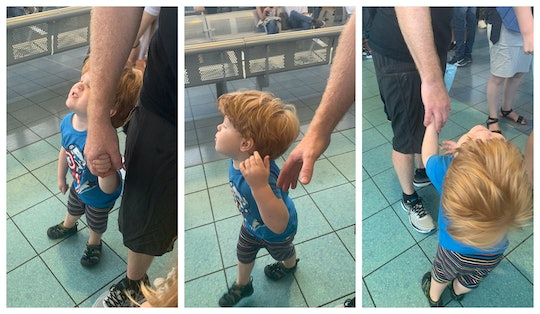 The Science Of Toddlers Going Boneless

If you’re a parent of anyone older than the age of 1, then you’re probably familiar with this scenario: your child, in a last-ditch attempt to resist you during a tantrum, relaxes all the muscles in his body and slumps to the floor. It’s funny at first, until it’s not. Essentially, your precious toddler has gone boneless.

“I don’t think there’s a medical term for going boneless,” says Denis Sukhodolsky, associate professor at the Yale Child Study Center who focuses on tantrums and neurodevelopmental disorders. He admitted he had to Google the term “boneless.” But then he quickly understood. “There’s a children’s book where it’s been popularized,” he says.

He’s right: The term “boneless” appears to have originated from Mo Williams’ Knuffle Bunny. (Pro tip: this is one of the greatest children’s books ever, so snag it if you haven’t done so yet.) Remember when Trixie recalls that she left her stuffed bunny behind at the laundromat but doesn’t have the words to tell her father? Frustrated, she cries and goes boneless.

“So the going full-on limp noodle may be in part out of fatigue, but it’s also when toddlers are out of ideas for showing you how much they don’t want to — fill in the blank — eat that yucky broccoli, buckle in the car, go to bed,” says Tamar Chansky, Ph.D., psychologist and author of Freeing Your Child From Anxiety.

These types of tantrums typically occur between the ages of 12 to 15 months, and involve loud crying followed by physically resistant behavior: falling to the floor, loosening of the body, and clinging behavior, according to a study published in the National Association of School Psychologists. The tantrums peak between the ages of 18 and 36 months, and they may escalate in frequency and intensity. New tantrum behaviors may appear: throwing themselves on the floor and biting themselves. By the time they’re 3, kids will develop language skills and will exhibit tantrums less frequently, unless they have learned that tantrums are an effective way to get what they want.

This tantrum could be triggered by anything or nothing at all. Sometimes, they’re just feeling frustrated with life and don’t have the ability to express themselves. A toddler tantrum frequently ends on the ground, in an apparent limp protest.

Physiologically, going boneless could be due to a sensory meltdown, and, physiologically, this is a fight, flight, or freeze response, says Elisabeth Bahr, pediatric occupational therapist in New York, and owner of Sensie, which provides parent education and coaching.

To parents, the sensory meltdown almost seems purposeless, Bahr says. After all, your child is a melted mess on the ground.

How could 20 pounds feel like 50 in an instant? It’s simply because they’ve become dead weight.

But for a child, going boneless is a last resort, and it’s their body’s response to their emotions, says Jennifer Daffon, a licensed mental health counselor who works with children and families in Washington state.

“At the point where kiddos are falling over and are completely unresponsive to their parent or caregiver, their brains have been hijacked by their amygdala,” Daffon says.

The amygdala lives inside of what you may describe as the emotional part of the brain: the limbic system.

“Once the amygdala takes over, the thinking part of the brain is essentially getting overridden — this is why negotiating with your tantruming kiddo at this point is useless,” Daffon says.

His brain is overcome by stress, and it’s sending a distress signal: crying. But his prefrontal cortex can’t manage this distress signal, and so it sends stress hormones throughout his body. Emotions rise, causing emotional pain so intense that it could become physical pain. These stress hormones also prevent rational thinking. Translation: a total brain freeze, and the toddler collapses and becomes boneless.

At that state, they feel ridiculously heavy: how could 20 pounds feel like 50 in an instant? It’s simply because they’ve become dead weight. Your child isn’t using his muscles to hold himself together.

While reasoning with the child is useless, hugging that limp body can help, because it activates his calming system and triggers oxytocin, which can begin to re-regulate his emotions.

Another way to help your completely emotionally overwhelmed kid make it through this tsunami of feelings by simply naming and tracking what they are seeing.

For example, a parent can say, ‘You are really frustrated/disappointed/ sad because this isn’t going your way, and when you’re ready, let’s work this out together.’

“Notice that nowhere have you stated that you’re giving into the tantrum — you’re simply giving your kiddo some space to let the thinking part kick back into gear, and letting them know the huge wave of emotion will pass, and you’re here to help make sure it does,” Daffon says.

Before you know it, they'll pull their bones back together, stand up, and be on their way.