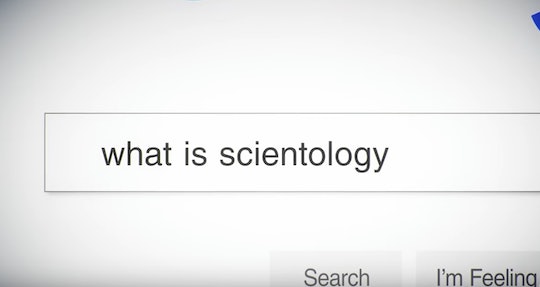 The Scientology Super Bowl Commercial Has Twitter Absolutely *Losing* It

The Super Bowl is known for its iconic, and sometimes problematic, commercials, and Super Bowl LII was no exception. But "I love it!" or "I hate it!" gave way to confusion late in the game, when the Scientology Super Bowl commercial had everyone asking themselves, and the rest of the internet: WTF? (Romper reached out to official Church of Scientology for comment, but didn't hear back at the time of publication.)

Perhaps it's a tad unfair that, in the year 2018, viewers are at all surprised to see a religious group air a Super Bowl commercial. Branding is, after all, for all of us, right? But the average cost of a Super Bowl commercial is an astounding $5 million for 30 seconds, according to Kantar Media. That's, um, a lot of money. So, as viewers, it's understandable to assume we'd only see big name brands like Chevrolet, Pepsi, Febreze, etc. pay such a profound amount of money for a mere 30-seconds worth of publicity. Enter: the Church of Scientology. The commercial was a surprise, to be sure, and Super Bowl LII viewers weren't entirely sure of what to make of the church spending that amount of money on an ad during sports' biggest day of the year. Regardless, they did, and Twitter had a few things to say about it:

According to Fortune, the IRS granted the Church of Scientology tax-exempt status after what was defined as "an unconventional meeting between the then-commissioner Fred T. Goldberg and Scientology’s current leader David Miscavige." Fortune goes on to add that Jeffrey Augustine, author of the blog The Scientology Money Project, believes the church brings in $200 million annually. Augustine bases his information on "conversations with former Scientology officials who have since left the organization," according to Fortune. If these reports are in any way accurate, it's clear to see how the Church of Scientology could afford to pay for a Super Bowl commercial spot. In fact, Twitter users were quick to make a point of that:

President Donald Trump said he would be open to revoking the Church of Scientology's tax-exempt status in Nov. 10, 2017, as reported by Fox News. The HuffPost reported that Lynne Patton, an official at the Department of Housing and Urban Development (HUD), told actress and former-Scientologist-turned-advocate Leah Remini that Remini's series, highlighting the church, was one of the reasons why the church should lose tax-exempt status. One does remember, however, that Trump recently proclaimed Jan. 16, 2018 as "Religious Freedom Day," and, in May of 2017, signed an executive order, according to The Washington Times, that made it "easier for churches to engage in partisan politics" by directing the IRS to not take 'adverse actions' against the tax-exempt status of churches and other religious organizations who engage in political speech."

So, I mean, what's a Super Bowl ad in the big scheme of things, right?

And regardless of why, or how, viewers remained confused as to why the Super Bowl was served with a side of religion. Here are a few more Tweets that scream "what in the what?!":

Freedom of religion is, without a doubt, one of the things that makes this country so great. And, of course, that doesn't mean to use your religion to discriminate against others, but to freely worship as you see fit. So, in the land of the free and the home of the brave, you can sit back, stuff your face with bbq wings and endless amounts of chips and dip, enjoy a Super Bowl halftime show, and, yes, watch an arguably oddly-placed ad for the Church of Scientology. Long live freedom.