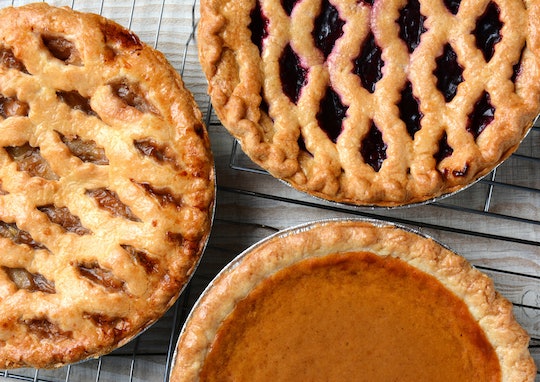 The Secret To Making The Perfect Pie Crust, So Your Delectable Filling Doesn’t Go To Waste

The saying “easy as pie” must refer to eating said pastry, because baking a pie is definitely not easy. You’ve got measuring, kneading, layering.any beginning bakers will shy away from making pie, due to the fearful lore of its difficulties. And even the experienced baker may find themselves defeated as they continue on their quest for the perfect pie crust, and resign themselves to yet another batch of cookies.

But this really shouldn’t be the case. Whether you’re the next Martha Stewart, or have barely mastered the Easy-Bake Oven, if you want to contribute a homemade pie to this year’s Thanksgiving festivities, don’t let any anx-pie-ity stop you. In talking with Kate Lebo, cookbook author and founder of Kate Lebo’s Pie School, we learned that anyone can make a damn delicious pie.

“The secret to making the perfect pie is to not worry about it being perfect,” Lebo says. Don’t be anxious about how your dessert is going to come out — Lebo assures us that once you pop a pie in the oven, it will come out delicious. The quest for so-called q perfection, she says, is what ruins your pie, especially the dough.

But in addition to her zen advice, she does offer a more tangible key to making the best pie crust. For most bakers, this it the most challenging part of the process, as a flaky, buttery shell can really make or break your dessert.

So what’s Lebo’s one secret to making that perfect pie crust? “Touch the crust only as much as you have to,” Lebo says. “If you fuss with pie dough, it’ll be bad. You’ll ruin it. Dough likes attention, not affection.” In essence, this secret is just a more concrete version of Lebo’s general guidance. In the search for perfection, you might be more likely to continue messing around with your dough, overdoing it and, eventually, ruining it.

When baking your pie, you’ll have to touch the dough as you rub the butter into the flour, but don’t overwork this step. To use Lebo’s phrase, only mix until, “the materials contain each other.” This means that you will still see butter and you will still see flour, but the two ingredients will have merged. Then stop touching your dough until you are ready to distribute the water.

Once you’ve put water on the dough, lightly toss to distribute. Lebo advises that kneading is for bread and tossing is for dough, so keep the touch light. Once the water is distributed, gently pat your dough into thick chubby disks and refrigerate for at least an hour before assembling your pie.

So now you’re equipped with the secret to a perfect crust and you’re ready to bring a homemade pie to Thanksgiving. If you’re looking for ideas on what variety to bake, Lebo has teamed up with Driscoll’s to concoct a recipe for a raspberry pie with walnut crumble and bourbon whipped cream, which is sure to be a showstopper this holiday. Or, you can try your hand at a family recipe. Whatever you decide, you’re sure to create something so delicious that you’ll become the family’s resident baker.