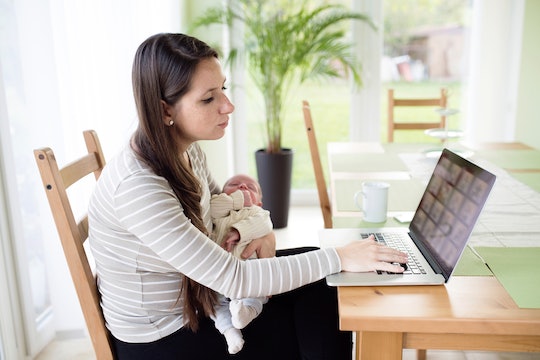 It's no secret at all that implementing support structures that would allow poor and middle-income families to flourish has not exactly been priority No. 1 for President Donald Trump and his administration. But while the president and his Republican acolytes have spent his term, so far, trying to figure out how to strip Americans of health care options and keep immigrants out of the country, the other party has been getting a plan together to do just that. On Thursday, they'll unveil one aspect of the fruits of that labor: the Senate Democrats' Child Care Bill. And judging by what's known about it so far, the plan could prove to be a pretty huge deal for working moms.

When first daughter and now-adviser to the president Ivanka Trump shared her own child care plan earlier this year — which involved tax deductions for child care — critics slammed it for exclusively aiding wealthy families. After all, it's hard to benefit for a tax deduction if you don't earn enough money to even pay taxes in the first place.

So, a group of Democratic senators have devised a counter-option that could very well be more inclusive and more scaleable than Ivanka's $5 billion proposal.

Citing an unnamed aide, Politico reported Wednesday that Sen. Patty Murray, a Washington Democrat, will lead the charge in introducing "Child Care for Working Families Act" on Thursday. In doing so, Murray and her colleagues aim to establish affordable child care as a key tenet of the Democrats' newly minted "Better Deal" agenda. Reportedly focused on helping lower- and middle-class families to afford child care arrangements, ensuring kids are prepared for kindergarten, and investing in child care workforce, the bill is "the Democrats' benchmark on what a national child care plan should look like," the aide reportedly told Politico.

Of course, details on how the bill would accomplish these admirable goals are scarce pre-rollout. And what's more, with Democrats in the minority in both the House and the Senate, they could be at a disadvantage to their more conservative colleagues when it comes to passing legislation. Still, party leadership is committed to showing that the issue has its attention, as Minority Leader Chuck Schumer and House Minority Leader Nancy Pelosi will attend the announcement of the bill, according to Politico.

Indeed, it's a clear push to demonstrate party cohesiveness around addressing a problem that plagues so many families.

After all, it's common for both parents in two-parent households in the United States to work — probably because it can be seriously tough to support a family on a single salary. According to the Pew Research Center, in 46 percent of families with two parents, both parents have full-time jobs. That can create a stressful logistical nightmare when the kids are too young to be in school or during the summertime.

All parents want their kids to spend their time somewhere safe and with people who truly care of about their well-being, but paying an outside source to do so can mean shelling out some serious dough. Prices to get quality care for an infant or toddler can hover around $1,000 per month, or more or less depending on where you live, according to Baby Center. Seemingly astronomical figures like that can make affording it all but unattainable for some.

And that makes any potential relief in the form of legislation a godsend for working moms and dads. Of course, the introduction of this child care bill by no means guarantees that anything even resembling its goals will make it to law. But, it's certainly a major step in the right direction.