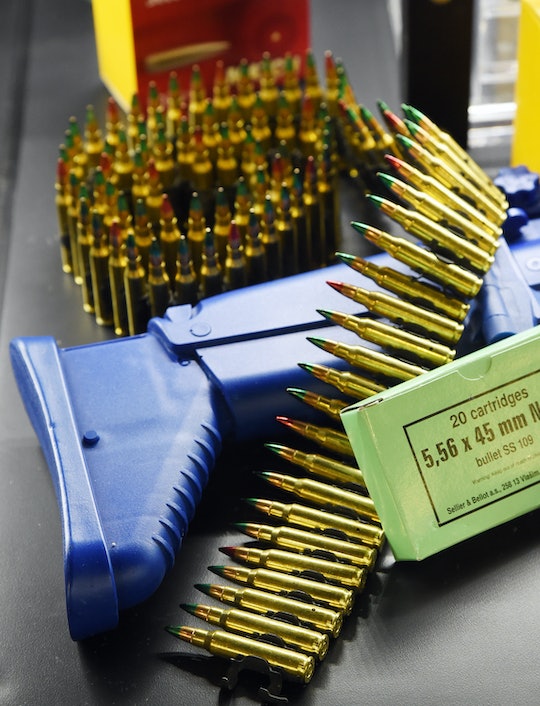 This week, in the wake of the Orlando nightclub shooting, America clamored once more to see changes made to gun laws. After a 15-hour filibuster led by Connecticut Sen. Chris Murphy forced the Senate to vote on bills proposed to reform the purchasing process for firearms, there was a faint glimmer of hope that maybe, just maybe, something would finally change. Included among the four gun sale proposals rejected by the Senate were a proposal that would've restricted firearms access to those on the terror watch list and a second proposal that would have closed the gun show and internet loophole allowing guns to be sold without background checks. These were, it seemed, reasonable proposals. Ones that should have been bipartisan. However, we failed to see any progress with gun reform yet again, and I am furious about the Senate's gun bill fail.

I'm furious because politicians are more concerned with lining their pockets with NRA cash than hearing the voice of the American people. They are more concerned with protecting their status as puppets for the NRA than protecting our children. I live in Nevada, a state where one of my representatives, Dean Heller, has received outrageous lobbying money from the NRA: over $122,802 in the course of his career so far, according to USUncut.com. He is paid to give me the same "sorry, not sorry" response every time I call or write his office — and trust me, I've done this often. I don't believe he cares about my voice, my fears, or my children. It would seem he represents the people who pay him, and my tax dollars simply don't add up to the big money of loyal lobbyists.

I am white hot with rage for our government's failures on bettering gun-sale control. And I wonder, not if, but when tragedy like this happens again, will our bought-and-paid-for politicians be the ones to buy and pay for the funerals of the victims?

I played the details in my head over and over again, marveling at how lucky we were, wondering how long that luck would last.

So instead of feeling like I'm making a difference, I feel helpless and ignored in a country where mass-shootings have become the norm. I simply try to outpace fear as gun violence creeps ever closer to everything I hold dear. First it was the children at Sandy Hook, who reminded me so much of my own children that all I could do was cry over my sleeping babies every night for days afterwards. Then there was the shooting at Sparks Middle School only a few yards from my old apartment complex where I lived in during college. I wondered if perhaps it was one of the kids I'd see walking along the street to school as I left for work in the mornings. Then my son's doctor was gunned down in Renown Hospital, on a day we couldn't get an appointment but had tried. I played the details in my head over and over again, marveling at how lucky we were, wondering how long that luck would last.

Even if gun violence never comes for me or my children, and statistically chances are it won't, it's infuriating that I cannot rely on even the slightest peace of mind from common sense gun reform. I can't even rely on our government. Politicians are not even remotely trying to change the tide and prevent future tragedies. They are actively fighting against the overwhelming majority of voters, selling their votes to the highest bidder rather than acting as civil servants.

Nothing should be more important than our kids, but this failure has shown that our children are very low on the list of priorities.

These proposals weren't part of a slippery slope to take away all our guns. These propositions didn't even attempt to touch guns. Not being able to pass even the most simple and non-invasive gun control measures is a failure that should infuriate all parents, because it tells us how little politicians value our children, their innocence, their sense of security, and their safety.

I hate that I have to send my son to a preschool where they do more lockdown drills than earthquake and fire drills.

Nothing should be more important than our kids, but this failure has shown that our children are very low on the list of priorities. Politicians would rather force preschoolers to learn how to quietly hide from a murderer than stop that murderer from having a gun in the first place. I hate that I have to send my son to a preschool where they do more lockdown drills than earthquake and fire drills. I hate that he might grow to fear the violence of a classmate or a friend or a stranger in a darkened bar. I hate that I will begin each day knowing how it may end for my children, not because of some freak accident, but because someone somewhere bought a gun with such ease and simplicity and then decided to use it on innocent people. And I hate that the response will once again be what it has always been: Oh, well.

I hate that I know full well the fact that our politicians — people we've elected into office to represent, serve, and be the voice of our needs — don't live with the reality of gun violence the way I do. They don't sleep with it under their bought-and-paid-for pillows. They don't feel the reverberations in their hardened hearts. To them it's abstract, but to me, it is anything but.

So yes, I am furious, and I will call and write and rage and keep hope that maybe, someday, my voice will be heard. Because even when it seems like all efforts are useless and all hope is lost, I want to show my children that their safety and security and future matters to someone. I want them to know without a doubt that it matters to me. I will fight against the odds for them, because that is my job. Now if only Congress could do theirs.