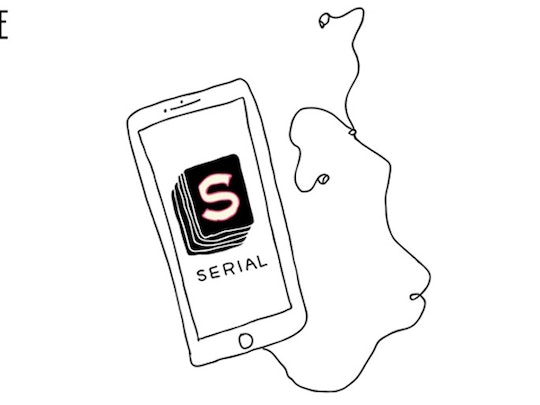 The 'Serial' Theme Song Got A Makeover, & It's Hauntingly Good

It's back! It's back! It's baaaaaack! The first episode of Season 2 of the smash-hit podcast Serial was released earlier in the day on December 10. This season's story centers on Bowe Bergdahl, a sergeant in the U.S. military who was captured by the Taliban while serving in Afghanistan. The Bergdahl story has garnered the attention and intrigue of an international audience, and this season is sure to be full of twists, turns, and absolutely surprising moments. However, the change of scenery (Bergdahl was stationed abroad when his capture took place) and the story aren't the only things that've changed for Season 2. Serial's also got a new theme song, and it's gonna haunt your dreams.

The show's producers chose Nick Thorburn, aka "Nick Diamonds," for the theme song to Season 1, and now he's back to score this next installment of the podcast. The new theme has many of the same elements as were found in Season 1, yet the tenor of the song has changed entirely. This year's music feels eerie, foreboding, and dark, much like Bergdahl's story, which has raised tons of questions in the media, the army, and in government. Season 2's theme song builds up, inch by inch, like the cases do, in complexity, leaving you wanting — craving — more, until its time to tune in for next week's episode.

In an interview with Vulture, Thorburn talked about the music from Season 1 and how he's changed the tempo, tune, and flow to match the intricacies of the Bergdahl case in Season 2.

Said Thorburn of Serial's first season and how he decided on the sound for Season 2:

The first season was a kind of a true-crime thing. I heard the first episode and made a library of music [for the producers to use] based on what I got from the first episode. Where I first went to was the Angelo Badalamenti Twin Peaks kind of thing: the twangy, echoey guitar and icy synths. This time around, I’m still sort of creating a library of sounds for them instead of more traditional scoring. I’m giving them a lot of cues and moods and tonal things. The music is different, but it’s sort of me just trying to go against the instinct of writing songs. My instinct is to have all these changes and these melodies, and I’m trying to reel that in and create a mood without necessarily a beginning, a middle, and an end.

As for his interest in returning for Season 2,Thorburn told Vulture that when he was approached he answered, "Hell yeah!" Adding:

I was very pleased to do it, and to try to do something better than what I had done before. It was a tall task, but I think I did it.

We wanted to change it because the theme the first year really belonged to that story.

After listening to inaugural episode of Season 2, the music does have a certain circular quality to it that feels reflective of the mind turning over facts, weighing alibis against evidence, going back to overlooked testimonies. It's hauntingly addictive, much like the story Sarah Koenig and co. have placed before us, ready to unravel slowly and methodically.