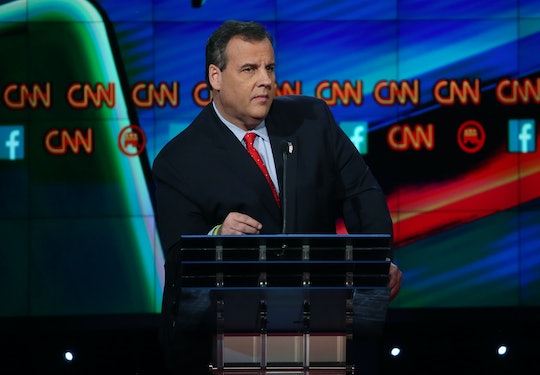 The Sexist Thing Chris Christie Said That You Might Have Missed

On Thursday, December 15, nine presidential hopefuls gathered in Los Vegas to remind Americans, once again, why they think they'd be best for our country. Chris Christie, in his opening monologue, however, took a different approach. Governor Chris Christie's sexist comment at the GOP debate took a turn for the absolute worst when said that "the mothers will be home when their kids get off the school bus, while the fathers are off at work." Oh boy. Let's get into this, but first, I've got to ask: How much time do you have?

First of all, let's talk about the problems with Christie's comments. Aside from the big, obvious slap in the face he just delivered to the millions of working mothers in the United States — many of whom literally and figuratively bring home the the bacon — Christie's comments are laden with other issues. First, it implies that there "should" be a father who heads off to work. What about LGBT families? Single moms? Trans parents? What about the families who don't adhere to heteronormative standards? What about families who don't believe in the antiquated idea of the traditional American family model?

It's completely devastating to hear a presidential hopeful get on stage and completely ignore and overlook the families that would come to rely on him if he were to become president. More than that, it's totally foolish of Christie to make this assumption given the obvious fact that these are votes he'll need should he continue to seek the presidential nomination for the Republican party. How will he appeal to the very women and men he's offended with his rhetoric?

And now, let's talk about dads. Because dads are important too. Christie just blindly assumes that the "fathers are off at work," but what say Christie to the many men who work from home or who've found nontraditional means to provide for their families?

Christie's comments shouldn't just piss you off (although trust me, they do plenty of that), they should remind you what he — and by association, the Republican party — stand for. Though that's not to say that every Republican is a bad person or to even imply that Republicans and/or Christie is a bad person. But it does make thousands of viewers — the moms at home and the fathers off at work — think twice.