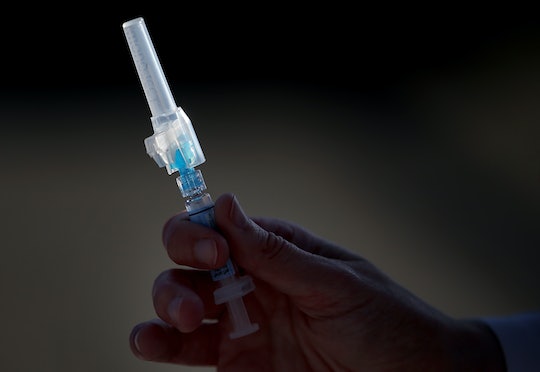 Many of us women who have been on the birth control pill have felt the side effects: rapid weight gain, moodiness, depression, nausea, and so much more. And yet, even with all of these side effects well documented, women are given few options in birth control and sometimes feel forced to go on the pill. In my personal case, I didn't even know there was another viable option until five years of being on the pill — and experiencing its horrible side effects. Imagine my surprise, then, when I discovered that trials on male birth control were halted because of side effects, some very similar to those created by birth control for women.

The Journal of Clinical Endocrinology & Metabolism published a study Thursday on a hormonal birth control shot for men, which aimed to prevent pregnancy by lowering men's sperm count. The shot was almost 100 percent effective at preventing pregnancy, according to the New Scientist. But the year-long trial ended early because of side effects like depression, muscle pain, acne, and more. Twenty men dropped out of the trial because of the side effects. Study co-author Dr. Mario Festin expressed concern to Live Science about the contraceptive's side effects.

Although the injections were effective in reducing the rate of pregnancy, the combination of hormones needs to be studied more to consider a good balance between efficacy and safety.

The study is being reported as "one step closer" to an effective birth control method for men, and researchers are repeating that there's still work to be done before a perfect male hormonal contraceptive is on the market.

In this trial, researchers ended the study after incidents of depression, irregular heart rate, and muscle pain occurred among some of the 270 male participants, according to BBC. So this contraceptive will not be sold to the public, and it will be improved upon in future research.

While it's smart that the men's trials were stopped when it was clear that the injection might not be safe, I can't help but notice that women's hormonal birth control hasn't been held to the same standard. Women experience side effects like depression, bloating, hair growth, decreased libido, and more. And it's all because researchers, pharmacists, and drug manufacturers must have thought these side effects were acceptable, and therefore allowed the contraceptive to go on the market. Of course, the same side effects in men are not acceptable — and they're what ended the trial and forced researchers to rethink the contraceptive.

According to Broadly, birth control trials for women were actually run quite differently when they began in the 1950s and '60s. Researchers struggled to find women to participate in the trials because of the contraceptive's side effects, so they forced women to participate. Women in medical school and mental hospitals were forced to take part in the trial. Bethy Squires of Broadly writes, "These women weren't told what the pill was for; instead, they were supposed to shut up, take their medicine, and submit to frequent, invasive medical exams."

Three women died in one trial, and their deaths were never investigated to see if they were consequences of the trial. The researcher himself said the contraceptive caused "too many side effects to be acceptable," according to PBS, but the first version of the pill was still released to the public.

Eventually, pills increased in safety, but women were still locked out of their own contraceptive process for a long time. And later, when women reported depression or other mood changes after being on the pill, they were often discounted even though a correlation had been documented. According to NPR, women who take the birth control pill have an 80 percent higher risk of depression. Recently, a Danish study confirmed the strong association between birth control and depression in women. So even with data on the negative side effects of hormonal contraceptives, companies have continued to manufacture, sell, and profit from these less-than-perfect pills.

I wish the same standards for safety and efficacy for men's birth control were used for women's birth control. It's great that the birth control shot for men is not going to be released to the public in its current form, because no one wants more people with health issues, mental or otherwise, in the world. But the fact that the men's birth control trial was halted because of side effects that are similar to what women experience everyday on the pill — that's a double standard we need to fix.