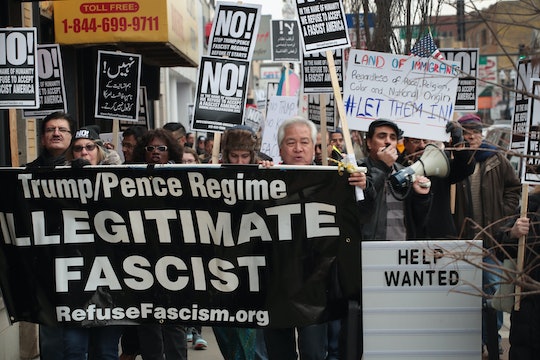 What Are The Early Warning Signs Of Fascism?

On Friday, the White House barred The New York Times and other news outlets from attending a briefing from the White House press secretary, Sean Spicer. This is not okay — and, understandably, made people very upset. People took to Twitter to share their frustrations and the word fascism was thrown around. It's true — the signs of fascism provide a scary context to the White House's relationship with the press — and provide another look at the decisions made by the current administration.

A poster seen at the United States Holocaust Museum in Washington D.C. stating the early warning signs of fascism went viral on Twitter last month, according to Mic, for a very scary reason — it draws similar parallels to our current political state, according to Complex. Fascism is, according to Merriam-Webster, a political philosophy "that exalts nation and often race above the individual and that stands for a centralized autocratic government headed by a dictatorial leader, severe economic and social regimentation, and forcible suppression of opposition." The White House did not respond to Romper's request for comment.

While all of these signs and their relevancy to today's politics could be argued, the barring of the media from the White House press briefing on Friday was a step in the wrong direction and a step towards a different one. According to The New York Times, the barring of Buzzfeed News, CNN, The Los Angeles Times, and Politico from the briefing room was "a highly unusual breach of relations between the White House and its press corps." This could have been seen or interpreted as an attempt to control the media. And in the context of the 14 early warning signs of fascism, this does not look good.

But long before Trump was in office, people were already worried about Trump and fascism. But according to the Harvard Gazette, a panel of historians stated that it is unlikely that fascism can exist in the United States currently — although the Trump administration's "attacks on traditional institutions, targeting of muslims from some countries, and other actions are unsettling signs." In an interview with Slate, author and fascism historian Robert Paxton stated that the conditions in countries where fascism rose in the past is nothing like the current climate and condition of United States — which is far better than those times.

CNN has promised that despite being kept out of the press meeting, they will keep reporting, regardless." Call Trump's barring of the media whatever you wish — but this attempt to control the mass media is not pretty.