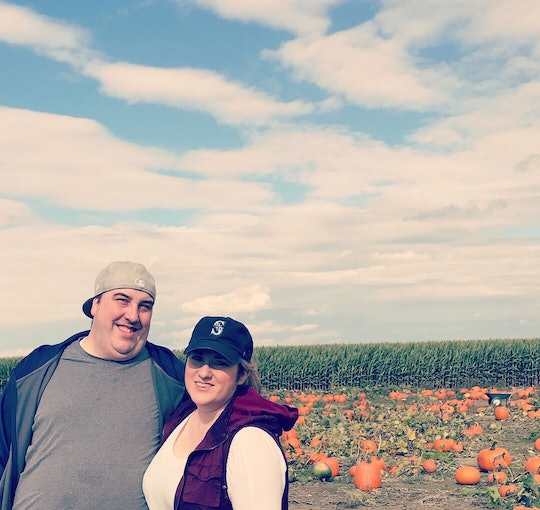 My Husband Deals With Our Infertility Differently

Jessie has been married for three years and trying to conceive for one year. This is the seventh installment of her Trying diary. You can read the previous entry here.

“I’m sad...” My husband is known to be a man of very few words, and even less so with respect to words related to how he may be feeling emotionally. I call him The Vault; typically what goes in stays in, locked away deep inside.

“It was only our first round,” I say, as if verbally dismissing my disappointment will change how my brain processes this crushing feeling. It was the start of my period — the signal that we had just experienced our first failed round of letrozole. I was taking it harder than I anticipated — the disappointment of yet another fertility roadblock was known to my partner without my saying anything more than “it’s here.”

I hadn’t fully considered that my ultra strong silent-type husband may feel some sort of way about the start of my cycle.

I was pulling out every trick my brain could come up with to be positive and tread water, but I felt myself being pulled under. The emotional distress, combined with hormones, was making for a particularly nasty case of the sads. In my struggle with overwhelming disappointment, I hadn’t fully considered that my ultra strong silent-type husband may feel some sort of way about the start of my cycle.

My husband was quietly going about his days that week doing everything he could to show me that he supported me. He wasn’t saying much, but that was pretty normal. I received some encouraging texts while I waited at my bus stop on campus trying not to pass out from painful cramping and blood loss. When I got home, he had done laundry and checked in with me to get a list of my needs from the store. He bought me a pair of shoes that I had been eyeing when we went shopping, and made me a delicious dinner. These things were not out of the ordinary, he is a very thoughtful person, but the manner in which he carried himself was different. He seemed a bit defeated, almost as though he was doing these things for reasons other than he typically would. It was as if he had to apologize for something or fix something that was broken.

When I got home after a particularly long day of learning, bleeding, and making coffee for other people, this quiet vault decided to open, and despite the fact that I was feeling like multi-layered shit, I was all about it. It started with me breaking my silence on the topic and explaining that I know I’m supposed to be positive and hopeful, but I’m feeling incredibly defeated and overwhelmed. This is when he said it. Right here. And it was the single moment that snapped me back into place and made me truly know that this truly was a team effort on every level, including emotional, the successes and the failures. “I’m sad”, he said, “You took all of that medication that made you feel sick... you’re in pain... we did everything we were supposed to... we timed it all out...I just thought it would happen.”

We did everything we were supposed to.

These are not feelings that are easily communicated by my husband, so it felt a bit like absolute silence echoing in my head in the minute that followed, but I think I said something to the effect of “I know, I’m sad too. We’ll just have to keep trying.” A weak smile, hands held.

I let him talk about it, and as soon as he withdrew, I let him.

I tried to support him in the same way he had been for me throughout the week, but we are different people and require different types of comfort. So I let him talk about it, and as soon as he withdrew, I let him, because I know that’s what he needs. I sent an email to my doctor to update him on my cycle, and requested what is known as a “trigger shot” of HCG. This is done near ovulation and triggers the release of mature eggs from their follicles.

We are taking another step forward in our journey, and I’m not sure whether it will be successful, or how we will react if it isn’t. I do know that this was only our first round with this particular medication, and trial and error is necessary in the best of situations. I know that it’s okay to be positive, and it’s also okay to feel lost and incredibly sad. The most important way that my partner and I can support each other is by sharing the contents of our vault, disappointment included.

More Like This
Infertility As A Stepmom Means Double The Alienation, But So Much Love
My Nanny Showed Me How To Be A Mother
Adult Gymnastics Brought Me Back To Myself
This Mother’s Day, What I Hope For Is Resilience