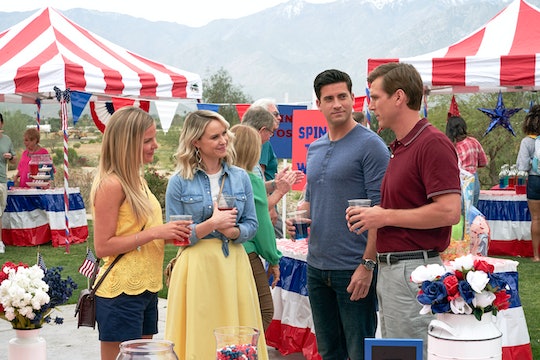 Everyone knows casting is an essential element in any good movie or TV show. Without a solid crew to bring the writing to life, it's a goner before it ever begins. One network that continually pulls amazing talent is Hallmark and the Sister of the Bride cast is one you won't want to forget. In fact, you may even find a little wedding inspiration while watching.

Sister of the Bride follows Stephanie (Becca Tobin) and Ben (Ryan Rottman) after their whirlwind romance and engagement after just six months of dating. Just when they're about to announce the news, her sister, Tracy (Chelsea Gilson), and her fiancé Preston (Brad Benedict) have, according to the Hallmark website, "also decided to tie the knot after 10 years of dating." There's a snafu when Stephanie and Tracy's parents declare they've accepted an offer on the vacation house both sisters had planned to marry in, leaving one couple out of luck over the 4th of July wedding date. Stephanie, being the good sister she is, gives the date and vacation house to her sister, but the drama is just beginning. A lot happens through the span of the two hour rom-com, so strap in and hold tight with this stellar cast who'll make you want a summer wedding ASAP.