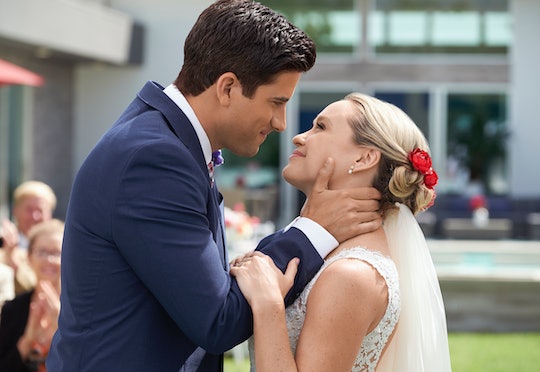 Hallmark Is Still Rolling Out All The Wedding Movies, But This One Is ~ A Lot ~

There's nothing like a summertime wedding blitz to make you feel alive. And Hallmark's lineup wedding-themed movies means you won't even have to leave the comfort of your couch to get a whiff of the love in the air. The latest flick to hit the network focuses on two engaged couples planning their bigs days. So, is the Sister of the Bride plot worth getting into, or is it just a little too much? Let me break it down.

More Like This
What To Stream Right Now For Kids Who Love History
Lisa Kudrow’s Son Used To Say "Mommy!" When He Saw Jennifer Aniston On TV
Everything There Is To Know About The Friends Reunion
The Great-Granddaughter Of Alice In Wonderland Is Getting Her Own Show

Any wedding-related movie will include its fair share of shenanigans that derail or distract from the wedding itself — though a happy ending is usually standard. The Sister of the Bride plot hits all of those notes but with a few surprises along the way.

The movie follows Stephanie (Becca Tobin) and fiancé, Ben (Ryan Rottman), who become engaged after six months of a whirlwind romance. When they travel to Palm Springs to tell Stephanie's parents at their vacation home, they discover Stephanie's sister, Tracy (Chelsea Gilson) has just become engaged to her fiancé Preston (Brad Benedict) after 10 years of dating. Talk about a one-upper moment for the ages. Sisters, am I right?

Naturally, with a movie like Sister of the Bride, both sets of couples want to marry at the vacation home on Independence Day, but who gets it? It's decided Tracy and Preston will marry first, with Stephanie and Ben to wed the following year. The catch? Their parents have gotten an offer on the vacation home, which they plan to sell. There's only one thing do do: Stephanie helps her sister plan her wedding while Ben and Stephanie's father get off on the wrong foot (because he and Steph haven't known each other long enough to marry, in his opinion).

Of course, because it's a rom-com, more nonsense ensues when an old flame appears at the worst time, which only proves Dad's point that Ben doesn't know Stephanie as well as a future husband should. Eventually, Ben and Stephanie's dad bond and it seems all good until (twist!) Ben's offered the opportunity of a lifetime working overseas, which threatens Stephanie's tenure in LA. Toss in a few glitches with Tracy and Preston's wedding, including a grandmother's broken hip, and both couples begin to wonder if it's the right time for either of them. Like I said — it's a lot to take in. If you take the movie at face value, it really is a feel good summer wedding movie with (probably) a happy ending for all. But when you tie in all the distractions, you may realize you need to pay close attention to keep up.

I applaud Hallmark for tackling so many wedding-themed movies to ring in the feels of summer. Sister of the Bride is, at its core, just that, but with a few more plot threads than normal. Even if the plot is a little messy, that's not a reason to avoid watching a movie like this. If anything, it's a great reminder of how complicated life can get in a such a short amount of time.