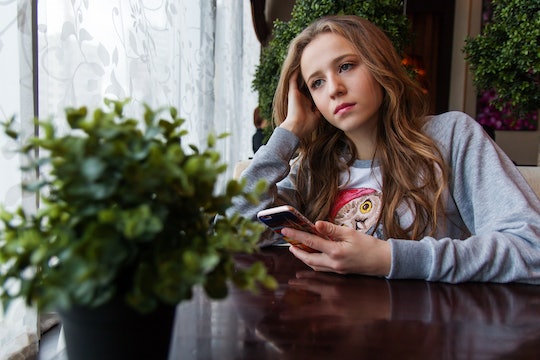 I already had FOMO without Instagram as a teenager. Since my parents were divorced, I typically spent my weekends with my dad. That meant that when my friends got together, or if I got invited to a birthday party, I generally said no but would wonder about how much fun without me. But at least the pictures of those missed opportunities weren't in my face: Instagram wasn't around yet, and I didn't join Facebook until 2010 and I was officially out of my teens (yeah, I know I was late). So it shouldn't be surprising that a study found that the smallest amount of social media use can make kids less happy.

But a new study, "Social Media Use and Children's Wellbeing," from the IZA Institute of Labor Economics shows that it doesn't take long at all for kids browsing social media sites to feel less happy — it only takes an hour.

And when teens spend nine hours a day consuming media (while tweens spend six hours), according to a 2015 study from Common Sense Media, that means teens have a greater chance of feeling bad about themselves.

Combing through pictures of happy couples when you're single has got to get depressing at some point, especially if you're spending hours staring at your phone.

The study revealed that the more kids and teens use social media, the less they feel satisfied with all other aspects of their lives, except for their friendships. Using social media for more than an hour a day makes teens 14 percent less likely to feel completely satisfied with life.

That's because after scrolling through dozens of filtered selfies on Instagram, a pic of your friend's new Apple watch, or your friends smiling happily in a group pic (that you have no idea they had to take the picture eight times to get that perfect shot), you're more likely to make social comparisons, which can make you feel bad about yourself and your life. Girls are more negatively impacted by social media use, and they are more likely to feel dissatisfied with their appearance, the study also found. Then there's the fact that teens want to project a perfect image of themselves on social media because everyone can see them.

"Adolescence and the early twenties in particular are the years in which you are acutely aware of the contrasts between who you appear to be and who you think you are,” developmental psychologist Dr. Donna Wick said in an interview with Child Mind.

As you get older and acquire more mastery, you begin to realize that you actually are good at some things...But imagine having your deepest darkest fear be that you aren’t as good as you look, and then imagine needing to look that good all the time! It’s exhausting.

Other studies have shown that social media use among teens is related to poor sleeping habits, anxiety, depression and low self-esteem. Teens aren't immune to feeling depressed when using social media more — a study from the University of Pittsburgh shows the same thing happens to young adults too.

The authors of "Social Media Use and Children's Wellbeing" do make note of the study's flaws: they didn't track what kids and teens were actually doing on social media, and different things on social media can impact kids in different ways. (Having a conversation with a friend may make them happy but looking at pictures of an ex can make them upset, for example).

But on another hand, if teens who use social media make social comparisons, wouldn't a kid who can't afford the latest game console or pair of Jordans sneakers be more likely to be impacted when they see their friends posting pictures of their cool stuff? It would be interesting to see, because looking at how poorer people use technology is often ignored in these studies.

And there's something that feels very doom and gloom about how social media is sucking out our kids' souls and happiness. Sure, social media puts pressure on teens to be "on" at all times, but it also can help make maintaining friendships easier. And let's not forget — social media can be fun.