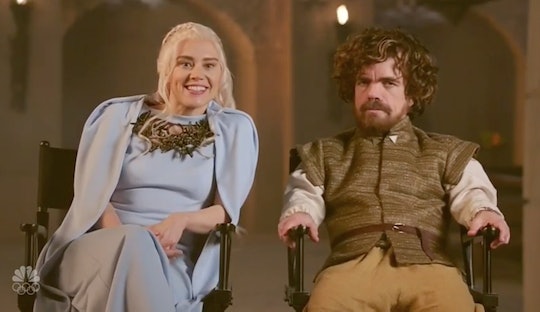 The 'SNL' 'Game Of Thrones' Parody Gives Fans A First Look At Season 6, Sort Of — VIDEO

With Peter Dinklage at the helm of Saturday Night Live, it seemed like a sure thing that there would be some type of Game of Thrones talk. I, as a fan, was hoping for some serious spoilers for Game of Thrones Season 6, even though that's basically asking for George R.R. Martin to publish the next book tomorrow — it was never going to happen. But, there was the SNL Game of Thrones Season 6 HBO parody, which gave fans a fictionalized look behind the scenes of the upcoming season. And, while it wasn't much (if anything at all), at least fans were able to get their eyes on a semi-first look of the season.

If you watch Game of Thrones, you are probably familiar with the HBO "First Look" featurette that the subscription-based service provides for fans. It's basically a short video that adds hype to upcoming series and movies coming to HBO. As if HBO needed to add more hype for Game of Thrones Season 6.

In the "first look," we learn from Dinklage that Season 6 finds Tyrion Lannister in the service of Daenerys Targaryen. He's seems pretty happy with it, since it puts him in a position to be in more scenes with the real scene stealer of the show, the dragon. In the behind-the-scenes featurette, Bobby Moynihan played the stunt actor behind the dragon, who wasn't bad, but also wasn't great at his job.

Moynihan proved to have some issues with the role. He cramps up in the harness, ruins scenes, and doesn't plan out his bathroom breaks in the most convenient way.

We also saw Daenerys tell the dragon that he only brought "pain to the kingdom," prompting him to fly out of a window. It was the one moment I thought we were going to get spoilers, but then I realized that Kate McKinnon is actually not Emilia Clarke and can't really speak to what is to come in the season. But, just in case she knows something we don't know, McKinnon as Daenerys said that in Season 6 "Daenerys is conflicted between two different..." and then Moynihan's dragon disrupts the moment and ruins the chance of any spoilers.

The future didn't look bright for Moynihan's dragon. By the end of the clip, he was being cut down from the wires via a cherry picker. While the clip didn't give any real Game of Thrones Season 6 spoilers, at least we were able to prep ourselves for the return of the series in some way.