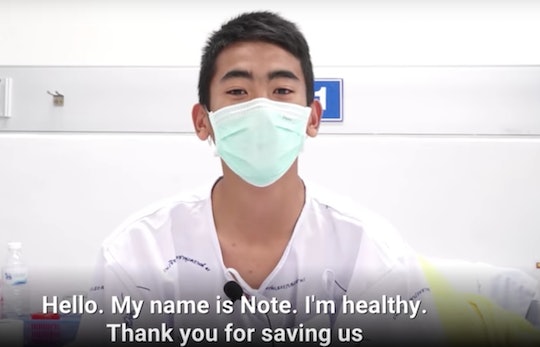 After over two weeks spent trapped in Tham Luang Nang Non, one of Thailand’s longest cave, 12 boys and their coach were rescued from the cave's flooded depths. It was an event that captured attention across the globe, with many concerned that the mission was essentially impossible. Now, the soccer team rescued from the Thai cave released a thank you video as they recover that will seriously tug at your heartstrings.

The boys, aged 11 to 16, and their coach originally became trapped inside the cave during a June 23 hike, as reported by The Washington Post. The group became trapped after Tham Luang Nang Non's tunnels and chambers extend six miles in length, even stretching into neighboring Myanmar, according to ABC News.

On July 10, after an extraction period that spanned three days, the final four boys and their coach were rescued from the cave, according to The Guardian. They were almost immediately transported to the hospital. Because the boys had been underground for so long, without adequate food, water, shelter, or even exposure to natural sunlight, The Guardian reported that doctors wanted them kept in isolation for up to seven days to avoid the risk of infection.

Now, five days after the rescue was complete, the boys have released a touching video to confirm their well-being and express their gratitude.

In the video, the boys are shown in their hospital beds, still wearing gowns and masks. According to TIME, Public Health Minister Dr. Piyasakol Sakolsattayatorn said all 13 people were expected to be discharged from the hospital on Thursday. "All of the 13 people, their physical bodies are strong, and fit. Regarding infections, through the medical evaluations in the first days there may be some of them that had minor pneumonia, but now all is cleared, no fever," Piyasakol said, as reported by TIME.

In the video shared and translated by CBC News, 14-year-old Adul Samon can be seen speaking and, according to the video, he was incredibly helpful throughout the team's rescue, as he was the only member who spoke English. In the original video of the boys inside the cave, taken by two British cave divers on July 2, nearly 10 days after the boys were originally trapped, it is Samon who can be heard speaking.

Two other boys who are part of the team, but not present for the hike, reportedly told ABC News that going into the cave was a local rite of passage and team-building exercise. However, one of the boys also noted that the team had never gone into the caves during Thailand's rainy season before. As noted by The Guardian, it was the rising water levels that not only led to the boys and their coach becoming trapped inside the cave, but also made rescue incredibly difficult.

Rescuers had to work against the clock, battling rain and the steadily lowering oxygen levels within the cave. On July 6, a retired Navy SEAL diver from Thailand, Saman Kunan, died after running out of air while placing extra oxygen tanks along the cave routed, as reported by USA Today.

The boys wrote messages of thanks on a portrait of Kunan. According to CNN, doctors decided last week to have the boys' relatives tell them about the death of Kunan. CNN reported that amongst their messages, the boys promised to be "good guys". It is a promise that they seem ready to keep.

The other members of the team, and their coach, spoke in Thai as they expressed their thanks. "Now, I am healthy like normal, can eat like normal," their 25-year-old coach, Ekapol Chanthawong, said, according to ABC News. "Thank you [everyone] who support us and every ministry that help me."

If all continues to go well, the boys and their coach will be officially released from the hospital on Thursday. And, after almost a month, they will be able to return home.