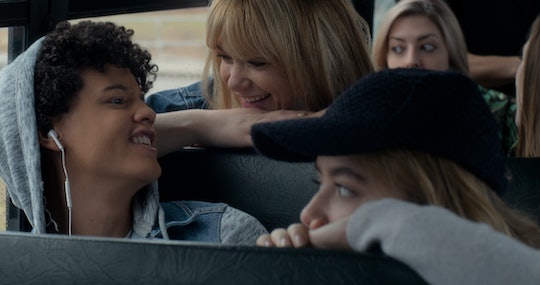 Fans never really know if or when their favorite Netflix show will be renewed for another season. But if you love one of its newest sci-fi hits you don't have to wonder anymore, because The Society Season 2 premieres in 2020.

The streaming platform made the official announcement July 9 on the show's official Twitter account and YouTube channel. According to cast members, next season fans will get answers to some of their most burning questions about Becca's "baby daddy," but that's about all I know. Production on Season 2 will begin later this year, so it's not surprising that there are very few answers about what happens next in New Ham.

I don't blame you if you want some clues about what to expect in Season 2. The Society creator Chris Keyser did drop some hints in an interview with The Hollywood Reporter in May 2019. He hopes to keep dealing with the natural questions that arise when power is at stake in a society with no rules. "[Season 1] deals a lot with men versus women, and it deals only briefly with race, but I think you can expect that conversation about class and race to keep coming up," Keyser said. "All these things need to be re-litigated in a world in which there are no givens. We hope, over time, and if we’re lucky enough to get a season two, to explore all the social contract questions that we take for granted."

A shift in power begins at the end of Season 1 when Lexie stages a coup against Allie so of course Season 2 will have to deal with the immediate aftermath of that. "One thing is that it’s not just Lexie, it's the triumvirate of Lexie, Harry, and Campbell, and the fact that those three don’t want all the same things, I think that’s going to be pretty interesting," Keyser said in the THR interview. "The idea of power-sharing among three people, none of whom trust anybody."

Keyser expected this to be a big question running through Season 2 before it was confirmed, and mentioned some parallels of the power switch to life in the U.S. right now. "I think there’s an interesting — and pretty timely — question about what happens if you give people who are entirely unfit for office the chance to run, and they make it!" Keyser told THR.

Fans are obviously pumped about the Season 2 announcement and took to Twitter to express their joy.

I'm guessing new episodes of The Society will drop in May 2020, following Netflix's typical annual release schedule. It's a long wait, but all of your questions will be answered soon enough, including the fate of Kathryn Newton's Allie as well as what, exactly, that dog has to do with anything. With any luck the mystery will get deep enough to take fans to yet another season. All that's left to do while you wait is to tell your friends about the show so they get hooked, too.