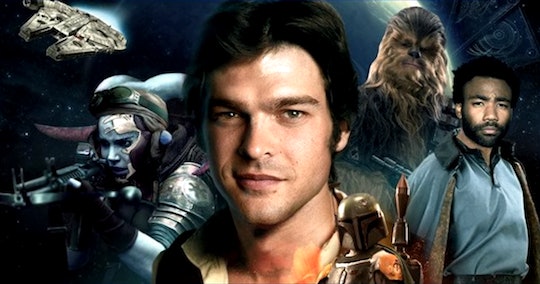 The ‘Solo’ Teaser Trailer During The Super Bowl Is Here, & Fans Are Shook

Sunday was a very important night, TV-wise. The annual awesome commercial showcase aired on NBC (briefly interrupted by some dudes running around with a ball), and one of the most hotly anticipated ads finally dropped: the Solo teaser trailer aired during the Super Bowl, and fans are absolutely shook. If you're not up to date on your Star Wars, first of all, that's a crime, but please be aware that spoilers will follow.

It's been more than two years since fans were forced to say goodbye to Han Solo, the most charming smuggler in any galaxy, Now, they've finally gotten their first look at the upcoming origin movie, a standalone "Star Wars Story" in the same vein as 2016's Rogue One. If anyone doubted Alden Ehrenreich's ability to fill Harrison Ford's boots, those concerns were certainly assuaged when young Solo uttered that famous line in the new teaser trailer: "best in the galaxy." Fans were also reunited with Han's frenemy, Lando Calrissian, who hasn't been seen in the flesh since 1983's Return of the Jedi. Donald Glover will take over for Billy Dee Williams in the new movie, out this Memorial Day.

Glover's casting was never doubted, of course, and in the precious two seconds he's afforded in the teaser trailer, he's wearing an expression of justifiable arrogance and a rather regal fur coat (I choose to believe that banthas shed their furry skin annually, and give them freely to humans; don't correct me).

That's it for familiar faces, but at the very end, fans will recognize the bandolier and signature growl of Chewbacca, Han's best friend and copilot. In Solo, as in The Last Jedi, Chewie will be played by Finnish actor Joonas Suotamo, who learned from the best when he tag-teamed the role with original actor Peter Mayhew in The Force Awakens, according to USA Today.

Many fans felt Han and Chewie's friendship didn't get the recognition it deserved in The Force Awakens, when Han's widow, General Leia Organa, chose to grieve the loss of her estranged husband with a complete stranger, rather than the Wookiee who spent decades by his side. Solo might serve to rectify that.

There have been concerns about the fate of Solo ever since Lucasfilm announced it would replace the original directors, Phil Lord and Chris Miller. But from the looks of the teaser trailer, it appears Solo will do the characters justice. Ron Howard stepped in to direct when just a few weeks of shooting remained last June, according to The Hollywood Reporter.

And we can all agree (OK, all but one of us, anyway) that it can't be worse than the prequels.

And as it always happens with nerd franchises (no shade; I'm one of you), fans started busting out their detective skills, freeze-framing and enhancing images like they work for the cybercrimes division of the Galactic Empire.

Yes, that's a Twi'lek dance party happening at the 30-second mark (pull it up on YouTube and set the playback speed to 0.25 to see for yourself).

But enough about them; let's discuss the actual dialogue, and the few hints about the plot. Am I crazy, or does the teaser show Han Solo, noted rogue and scoundrel, joining the damn Empire?

Right, that's what I thought.

Fans who are thirsty for more clues don't have to wait long; the full 2-minute trailer will premiere during Good Morning America on Monday. It's OK; we know that Han eventually ended up on the right side of history. And come May, we'll know how.