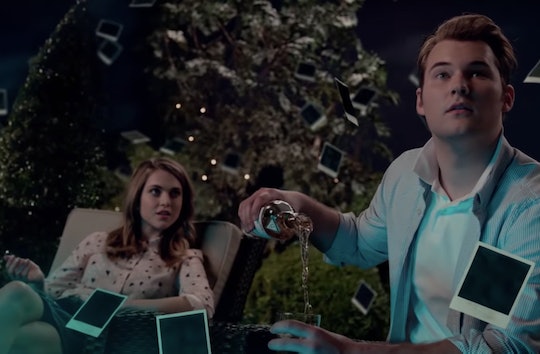 After months of anticipation, 13 Reasons Why finally has a premiere date, and if the first trailer is anything to go by, the story has really just begun. Released on Monday, the new teaser shows the characters each frozen and surrounded by developing polaroid photos. As the pictures become clear, the images within them are revealed. And the song playing in the 13 Reasons Why Season 2 trailer might give a clue as to what's in store for fans come May 18. (Note: If you haven't seen Season 1, this post contains spoilers.)

"I Feel You" by Depeche Mode is the soft rock jam accompanying the Season 2 announcement. "The truth is developing," the video description reads, making the lyrics even eerier. "I feel you/ Your sun shines/ I feel you/ Within my mind," the verses begin. "You take me there/ You take me where/ The kingdom comes/ You take me to/ And lead me through/ Babylon." (In the bible, Babylon is known as the city of sin and pride.)

Show runner Brian Yorkey told Entertainment Weekly that Season 2 "picks up in the aftermath of Hannah's death and the start of our characters' complicated journeys toward healing and recovery." He continued:

Liberty High prepares to go on trial, but someone will stop at nothing to keep the truth surrounding Hannah’s death concealed [...] A series of ominous polaroids lead Clay and his classmates to uncover a sickening secret and a conspiracy to cover it up.

Of course, that explanation makes perfect sense given the trailer, and judging by the dark nature of what develops in those photos, it's probably going to be as chilling as the first season was, too. One of the main questions that remained after Season 1 concluded was whether or not Hannah would still be in the show, which Yorkey addressed in his Entertainment Tonight interview:

Oh absolutely. I think one of the things that is still hanging out there is this question of is someone responsible for Hannah’s death? Is the school responsible? Who is responsible, if anyone is? One way we’ll explore that question is through the trial and also through all of these kids reflecting on where they are a few months down the road and what other secrets are being uncovered. That’s going to take us into the past, into Hannah’s story.

Katherine Langford, who played Hannah in the first season, echoed that sentiment in her own interview with Entertainment Weekly, in which she explained that Season 2 will be different in some important ways. "It’s a different story than season 1 and I think that’s a good thing," she told Entertainment Weekly. "This season we get to explore a lot more of the other characters and their journeys, which I’m excited about. As sad as it is, there is life after Hannah, and this season we get to see the effects it had on the people around her a lot more."

Things are going to be different in Season 2, that's for sure. Polaroids are the new tapes, the truth is even more complicated than before, and the character development seems to be positioning Season 1 as more of an exposition than a climax. Given the information given to fans by the show runner and its star, as well as the dark (but still more modern) interpretation in the newest teaser, it's safe to say there will be a lot to digest come May 18.