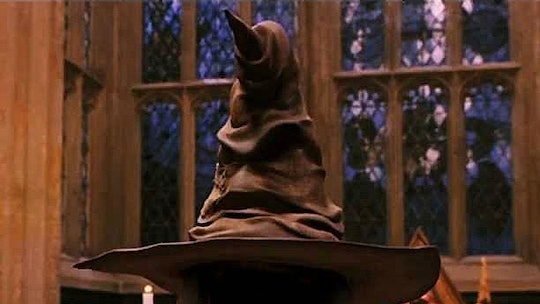 I never thought I'd end my day being angry at a hat, but here we are. Harry Potter fans who are eager to have their character judged by an inanimate object are in luck; After a brief hiatus, the Sorting Hat quiz has returned to Pottermore, the Harry Potter expanded universe website. Mashable reported this week that the original quiz disappeared from the site during its September 2015 redesign, but it's back, and it's ready to hurt your feelings.

Visitors to the site will first be prompted to create a free Pottermore account before being directed to a Buzzfeed-style quiz, where they must choose whether they'd prefer to bring a cat, an owl, or a toad to Hogwarts, and how they wish to be remembered after they're dead. In the spirit of being thorough, I took the the quiz myself, and I'm here to tell you that it's dumb and bad and awful because I am most definitely not a Hufflepuff. I've never been so insulted in my life.

If Gilligan's Island had houses, the Professor and Mary Ann would have been sorted into Hufflepuff. Hufflepuff is the "and the rest" of houses. Slytherin is for pure-bloods, Gryffindor is for brave wizards, Ravenclaw is for smart wizards, and Hufflepuff is for the leftovers, who are none of the above. You know who was a Hufflepuff? Cedric Diggory, whose main personality trait was "handsome." How dare you, Sorting Hat?

It's certainly possible that the site was only having a temporary malfunction, and is now sorting users into their correct houses, so do feel free to give it a try. There's also a quiz to let your wand choose you, where users must answer questions about their height, eye color, and deepest fears. My wand is "Hazel wood with a dragon heartstring core, 12 ½" and reasonably supple flexibility," which is fine, I guess, unless it turns out that the dragon who gave its heartstring also gave one to another wand, and that wand belongs to Ed Sheeran, or that one bland guy who's in every commercial or something.

But back to the hat, because I'm still mad about the hat. Am I the only person who was wrongly judged by that dumb hat? I took to Twitter to find out:

So I'm not crazy. This new Sorting Hat is defective, and I absolutely refuse to accept its authority. Maybe one day I'll fly to London and have the real hat sort me, because this one is a complete and utter fraud. But, I mean, you do you. Go take the quiz if you feel like it. Whatever.