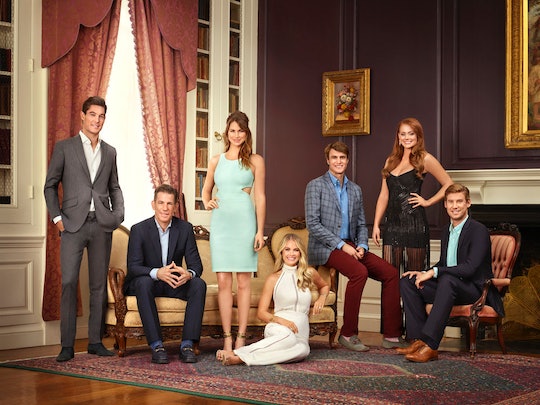 Southern Charm follows the escapades of southern socialites in Charleston, South Carolina and, like all of Bravo's location-specific reality shows, it's all about flashing around as much cash as you can. Bravo shows always deal in drinking, drama, and luxury, complete with extensive shopping, insane houses, and envy-inducing trips. To afford the kind of lifestyle they lead, you know the cast has got to be making at least a pretty penny or two. The Southern Charm cast ranked by net worth proves the cast of the show has got quite a significant amount of cash coming in.

Which is helpful for the status-obsessed socialites, no doubt. Tuning in to Southern Charm (or any of the Real Housewives shows, for that matter) is like revisiting the heyday of Lifestyles of the Rich and Famous (except without the "famous" part), so it makes sense that fans might wonder about each cast member's net worth. It puts all of that opulence in context a little to know exactly where it's coming from.

So let's take a look at the net worth of the cast of Southern Charm, ranked from the lowest (which is still pretty high) to the highest (which might not be as high as you think). And take it all with a grain of salt — these are just estimations.

Austen is the newest addition to the cast, and he'll be making his first appearance in Season 4. Considering he's not as well known as his cast mates, his net worth has yet to make it to the internet. He sells craft beer for an Atlanta brewery, though it seems like he might have some family money as well; his Bravo bio indicates they had a second home while he was growing up, and he's enjoyed some traveling. But his unknown net worth keeps him at the low end of the list, because there's just no way to know for sure how much he's worth.

Celebrity Net Worth lists Shep's net worth as around $200k, and it seems as though a lot of his wealth is generational as well. Apparently the town of Boykin and its state dog (the Boykin spaniel) are named after his mother's family, and his uncle B. Boykin Rose was the South Carolina Department of Public Safety director. Shep has an MBA from Vanderbilt and has worked in commercial real estate development, and also opened a restaurant called the Palace Hotel.

Craig's net worth is assumed to be roughly the same as Shep's according to Celebrity Net Worth. Craig was a law clerk at the personal injury firm Anastopoulo Law Firm, though his LinkedIn no longer lists him as working there. It currently lists him as the CEO and founder of Apex Principles, Inc. and, like everyone on this list, he also makes some money from his appearances on Southern Charm.

The-Net-Worth lists Cameran's net worth at around $550k as of 2016. She previously worked in the cosmetic industry before switching to a real estate career and becoming a licensed broker. She's also married to anesthesiologist Jason Wimberly, which surely adds to her net worth as well.

Kathryn's net worth includes income from a few different sources. While Celebrity Net Worth attributes some of her wealth to her modeling career and reality TV appearances, she also has quite a bit of family money as well. She is descended from the seventh Vice President of the United States, John C. Calhoun, and her grandfather Rembert C. Dennis served in the South Carolina House of Representative and the South Carolina Senate for almost 50 years.

Celebrity Net Worth lists Thomas' net worth at around $2 million dollars, making him one of the wealthiest cast members on the show. That makes sense, because Thomas was the former State Treasurer of South Carolina and he also founded a commercial real estate company called the Ravenel Development Corporation. He was suspended as Treasurer following federal drug charges.

Coming in on top is Landon, whose net worth is estimated by Celebrity Net Worth to be around $3 million dollars. She's had many different careers, including interior design, photography, writing, and developing hotels, restaurants, and nightclubs. Currently she paints and manages a travel site called Trovare. And apparently she's really good at finance, because her net worth is pretty impressive.

It may not be Lisa Vanderpump money, but the cast of Southern Charm is doing OK for themselves.