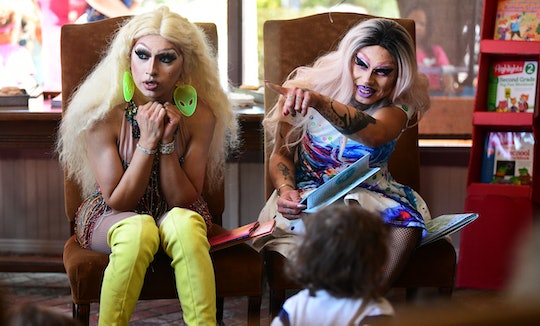 Miss Drag Queen Story Hour? Here's How To Bring It Into Your Home

“Now you are fancy.” My 3-year-old daughter placed a cracked plastic tiara on my head. We were playing dress up. We are almost always playing some form of dress up. “Daddy can’t be fancy,” she added, then paused. Crinkled her forehead. “Oh wait! Yes he can! Daddy can be a drag queen!” And off she ran with beads and a tutu.

Sofia attended her first Drag Queen Story Hour (DQSH) at 6 months old. It was early in the program’s second year, and the library was standing room only. Granted, my daughter slept through most of it, but like so many children and adults alike, she’s grown to love these story hours: the exuberance, the warmth and camaraderie, and yes, the sparkle. With daycare shut, playgrounds closed, and playdates on hold, her weekly storytime at the local library is among the things we both miss most, though, in the spirit of DQSH, the party has found a way to continue through virtual events.

Drag Queen Story Hour began in 2015, when author and LGBTQ-rights activist Michelle Tea was inspired to make library story hours more inclusive, spaces where children could see and connect with positive LGBTQ role models and expand their imaginations. Tea organized the first reading at the Harvey Milk Memorial Library in San Francisco’s Castro quarter, and since then, the event has grown exponentially. There are over 50 official chapters of DQSH, from New York City to Salt Lake City and all the way to Tokyo, with events in libraries, bookstores, even schools.

Today, the event is 45 minutes of stories and songs rolled in glitter and dosed with funk. Drag queens bring classic children’s stories to life — imagine Rapunzel performed by a queen with long pink, synthetic hair — and also read books that deal with LGBTQ issues or have larger social messages about inclusivity. It is a space where all are welcome and bold self-expression is encouraged. Brooklyn mom Karen Lepri says attending the events make everyone "feel welcome and happy to be themselves.”

One of DQSH’s most charming features is the reinvention of children’s songs. Lil Miss Hot Mess, who helped get the New York City chapter of DQSH off the ground, has livened up the exhausted “Wheels on the Bus” in her new children’s book The Hips On The Drag Queen Go Swish Swish Swish. She dreamed up the song on her way to a DQSH, thinking about how to make the readings more interactive. “It presents queerness in a more tangible way, getting kids to embrace parts of themselves by moving their body,” she tells Romper. “Not to put on my shoes, but to think about what kind of shoes they want to be in, how it feels to dance in them, walk around and stomp in them.”

Mimicry and parody is, anyway, a part of drag. “We rewrite songs, take things in the culture and give them twists to help us think about them in new ways,” says Miss Mess.

My daughter certainly loves this more glamorous version of her favorite song. She loves the big movements when we sing it, and the explosive color that illustrator Olga de Dios brings to the pages as the drag queens bling, stomp, and twirl through a dreary gray town, their parade infusing the streets with color.

It’s about inverting and playing with gender, and creating LGBTQ visibility in a way that is appropriate for children, without any anxiety or hostility,” says Miss Mess. “But it’s also developing a character, learning how to be bold and color outside the lines, take whatever fantasy or interior vision you have and make that fabulous on the outside as well.”

This sense of reinventing what is possible appeals to adults, as well. Lepri says she was “shocked” at how her elderly parents enjoy DQSH, and in Ellen Friedrichs’s family, DQSH is a special Saturday morning “grandma activity.” When Kaitlin McMenemon-Taraby had DQSH come to her daughter’s first birthday in Brooklyn, the adults were as entertained and engaged as the kids.

But like all things radical, there is some resistance. McMenemon-Taraby added, “It did cross my mind that some of my guests might be uncomfortable. I wouldn’t have changed my mind, but the fact that I even had that mental pause made me all the more convinced of why we need this program.”

We do, especially in a political climate that fosters disgust over acceptance, fear over love.

Despite some pushback and small protests, DQSH is reaching marginalized communities and conservative areas. “It’s one of those crazy ideas that’s not that crazy at all,” says Lil Miss Hot Mess of the initiative’s wide appeal “Kids are all about dress up, fantasy and play, which is at the heart of drag.” And to concerns that the event is political, she says, “DQSH is not about making queerness normal, but about making it OK to be different.”

More Like This
The 55 Best Chapter Books For Kids At Every Age
13 Kid-Friendly Ghost Stories For Littles Ones
18 Fun Mother & Son Halloween Costume Ideas
Where To Buy School Uniforms, From Jumpers To Dress Socks