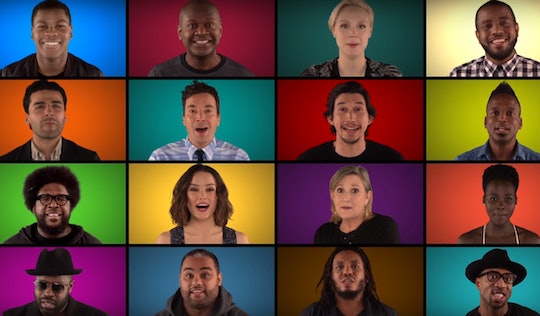 The ‘Star Wars’ Cast Did A Cappella With Jimmy Fallon On ‘The Tonight Show,’ & It Was Even Better Than You'd Think

The Tonight Show host has had many of the film’s cast members on as guests over the last few weeks, including Harrison Ford, Daisy Ridley, John Boyega, and Adam Driver. Those stars appear in the a cappella video, as do fellow Force Awakens cast members Oscar Isaac, Gwendoline Christie, Carrie Fisher, and even Chewbacca.

The official release date for Star Wars: The Force Awakens is Friday, December 18, 2015. Directed by J.J. Abrams, the movie is set three decades after the original trilogy ends. The movie has a 97 percent on the Tomatometer, and Rotten Tomatoes offers a delightfully positive Critics Consensus: "Packed with action and populated by both familiar faces and fresh blood, The Force Awakens successfully recalls the series' former glory while injecting it with renewed energy."

You can watch Fallon's medley here:

R2-D2 and C-3PO singing a cappella? It doesn't really get better than that.