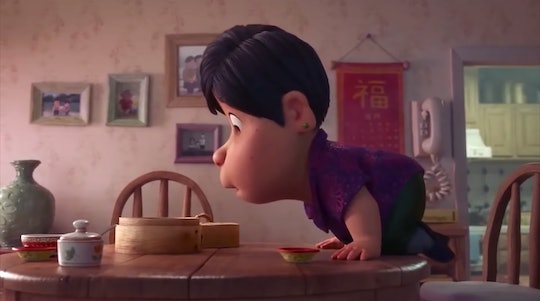 Here's The Story Behind ‘Bao,’ The Visceral Animated Short Before 'Incredibles 2'

If you're like me and only shell out the big bucks to see really good movies in theaters, Incredibles 2 is definitely the next one to add to your list. Not only did my ticket get me more than two hours of Incredible action, but I also got to watch a silent, animated short film called Bao, which plays before the feature presentation. And given the popularity of Incredibles 2, many want to know the story behind Bao, Pixar's newest animated short. Let's just say it's definitely one that will resonate with parents.

Bao, written and directed by Domee Shi, opens on a Chinese mother making dumplings by hand. (Side note: the dumplings, though animated, looked sooo yum.) She cooks and serves the dumplings to her husband and herself, and just as she's about to eat her last one, it comes alive. It sprouts tiny arms and legs and facial features, and the mother is instantly in love. The film then shows a montage of the mother raising the anthropomorphic dumpling. And as he grows bigger, she grows more and more protective, keeping him from playing with friends. Eventually, he becomes a rebellious, brash young adult, and he brings a woman home, announcing their engagement. In a fit of despair — and in the film's most shocking, gruesome moment — the mother shoves the dumpling into her mouth and swallows him to keep him from leaving her. (I'm pretty sure everyone in the movie theater gasped at that moment.)

In the next scene, the regretful mother is crying in her bed, and the dumpling has magically returned to talk to her — although he's not a dumpling, he was a full-grown man this whole time, and he sits down and comforts his mother. Then, the family of three, along with the dumpling-man's fiancée, all sit around the table making dumplings together.

The film serves as a metaphor about an overprotective parent who is worried about letting their child go live a life of their own. Shi, the first woman to ever direct a Pixar short, opened up about the deeper meaning of the film in an interview with Thrillist. "My mom would often hold me close and say, 'Aw, I wish I could put you back in my stomach so I knew exactly where you were at all times,'" she told Thrillist. "Like, 'Aw, that's creepy but sweet,' I guess."

Shi also told Thrillist that she had always envisioned the mother eventually eating the dumpling:

It felt like such a shocking but inevitable end to their relationship because he's such a naughty little boy, but also a dumpling [so] that of course she would eat him to prevent him from leaving.

Shi further explained the meaning of the disturbing moment in an interview with the Los Angeles Times. She told the newspaper:

The mom character immediately regrets it, as I think we all would if we did that. But I wanted to tap into that feeling. That primal feeling of just wanting to love something so much that you’re willing to destroy it so it won’t go away.

Even though Shi was the first woman to direct a Pixar short, she has plenty of experience. The Chinese Canadian director worked as a story artist on Inside Out, The Good Dinosaur, and the upcoming Toy Story 4, Fox News reported. And she made sure to fill the film with details specific to Chinese culture. Shi told the Los Angeles Times:

All of the little props and things around the Chinese mom’s house I wanted to get into the short. Our production designer Rona Liu is Chinese American so that was really helpful because she was also able to keep track of those little cultural details as well.

So despite Bao's shocking, um, mother-eats-her-dumpling-son scene, the eight-minute film tells a story that both parents and children will surely relate to — or, at the very least, it will inspire a craving for dumplings.