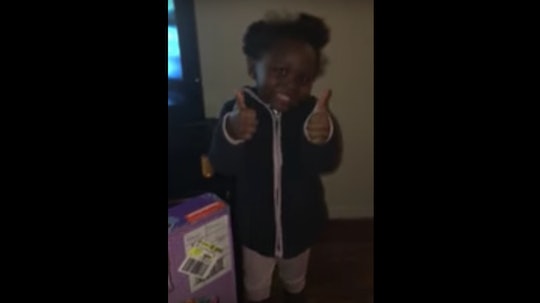 The holiday season is especially hard on low-income families, since the pressure is on to give kids the "best" experience on Christmas morning when they wake up to see what Santa brought them. As most parents know, kids pick up on a lot more than one might think, which is exactly why this son's Christmas surprise for his mom will first break your heart. But don't worry — it has a happy ending.

Sophia Reed is a single mother of four kids who recently moved to Oklahoma City after her husband left her out of nowhere, as People reported. The move, along with the security deposit and first month's rent cleared out her savings account, so she knew Christmas would be pretty light this year.

"We was expecting a nice dinner for Christmas and just be together and just show love to each other," she told local CBS News affiliate WTOL 11. Right after the move though, more trouble supposedly loomed. Reed thought her 13-year-old son Deauris was up to something when he kept disappearing for hours on end in the afternoon. So she called the cops to go looking for him, according to WTOL 11.

When Officer Roland Russell arrived at the house, he reportedly talked to the mother, took the report, and then left. He told KOCO News 5, "On my way out to my car, I go down the stairs and I see him sitting there. It was, like probably, 30 degrees outside, and he had a little T-shirt on.”

Deauris reportedly told the officer that he was just out during the day collecting recyclable cans to get some cash together to help his mom out for the holiday and "give his family a Christmas," according to Russell, as KOCO News 5 reported. He had raised $25 total.

When his mother called the police, Deauris' sister Daniesha was having trouble keeping his secret. “I was afraid he was going to get in trouble. I just didn’t want to say anything because it would blow the whole thing," she told FOX 8.

Russell was moved by the kids' determination to provide for his family, so he told other officers in his squad. Everyone wanted to help out. They reportedly began to visit the family's house and leave donations for the holiday. Reed told WTOL 11 that every time the doorbell rang it was police bringing Christmas cheer.

Russell said that he just kept getting messages from other officers. “I started getting messages from all kinds of people,” Russell said KOCO News 5. “I didn’t think I was going to and it ended up turning into a pretty big deal.” In all, the officers raised over $800 to buy presents for the family, according to the outlet. Deauris got a new bike, his sisters all got new toys, and their mom some new clothes. A video on YouTube shows the 4-year-old accepting her gifts, giving them all a thumbs up.

Reed told the outlet, "They caught us at the right time. We are so blessed and grateful."

The Reeds aren't the only family who struggled this year. The National Center for Children in Poverty reports that 21 percent of all kids live in families that are earn less than the federal poverty level.

The problem is that most families need an income about twice of the federal poverty level to cover just the basics, let alone a sparkling Christmas tree surrounded by Paw Patrol toys and new bikes. Which means that the rate of kids living in households in which their working parents can't provide all the extras is much higher than that.

The generosity of the Oklahoma City police department and Deauris is something the world could use a lot more of. And not just during the holiday season when peoples' needs are more obvious, but all year long.