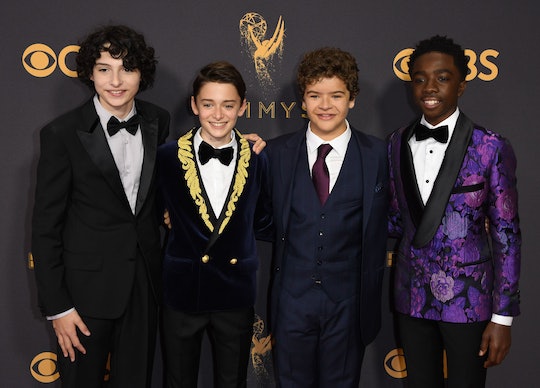 Before the Emmys begins, the stars must walk the red carpet, and while the awards ceremony will certainly be a fun event in and of itself, a lot of the best moments happen on the red carpet. One of the most beloved red carpet sightings of late has been the gang of the youngest Stranger Things stars. As always, they didn't disappoint Sunday night. The Stranger Things kids on the Emmys red carpet definitely stole the show, and people won't stop talking about them.

First to arrive on the carpet were the Stranger Things boys. Finn Wolfhand, 14, looked incredibly dapper wearing a Prada suit. Besides celebrating the Emmys tonight with his costars, Wolfhand is also having a great week because his new movie, It, is killing it at the box office. It's like Wolfhand was made to play kids in the '80s who have to deal with terrifying monsters.

Gaten Matarazzo, 15, Caleb McLaughlin, 15, and Noah Schnapp, 12, also looked adorable in their designer suits, but Matarazzo stood out, wearing a red tie with his Ted Baker suit. That's not to say the other boys didn't all look great. Schnapp's suit was tailored with gold around the collar and cuffs that gave me serious Michael Jackson vibes.

McLaughlin, who always brings his A game to the red carpet, was daring with a Garcon Couture purple suit jacket. They each obviously have their own distinct sense of style, and they all looked great.

Later on, Millie Bobby Brown, 13, graced us all with her gorgeous presence, walking the carpet solo in a strapless white dress. Naturally, she looked a genuine princess. Truly, if I didn't know better I'd think she was nominated for her role in The Crown tonight, not Stranger Things.

Brown is up for her first Emmy tonight for playing the waffle-loving telekinetic, Eleven, on the popular Netflix series. Going for the Supporting Actress in a Drama Series award, Brown is up against some tough competition. Also in her category is Ann Dowd (The Handmaid's Tale), Samira Wiley (The Handmaid's Tale), two-time Emmy winner Uzo Aduba (Orange Is the New Black), Chrissy Metz (This Is Us), and Thandie Newton (Westworld).

Hopefully, Brown can snag the win, but even if she doesn't, it's incredible that she's already been nominated at such a young age. Then again, she really deserves it. Fans fell in love with Eleven because of the incredible range of emotion Brown was able to portray in the series. From making viewers want to give her a hug and help her through her trauma to viewers then yelling in excitement when she used her powers to defend her new friends.

Brown brought Eleven to life, and fans can't wait to see how she'll return in the new season, which will be released on Netflix on Friday, Oct. 27, just in time for Halloween.

Besides Brown's nom, Stranger Things got a total of 18 Emmy nominations and has already won a few creative Emmys over the weekend. On Sunday David Harbour, also known as officer Jim Hopper, is also up for an Emmy for Outstanding Supporting Actor in a Drama Series. And, of course, the show itself is also up for the Outstanding Drama Series.

The sci-fi drama is up against two other Netflix series, The Crown and House of Cards, as well as The Handmaid's Tale, This Is Us, and Westworld. This is also a tough category and, unfortunately, in the past sci-fi hasn't done that great at the Emmys. Still, that doesn't mean Stranger Things doesn't stand a chance. Fans will just have to keep their fingers crossed that the '80s themed show walks away with the win.