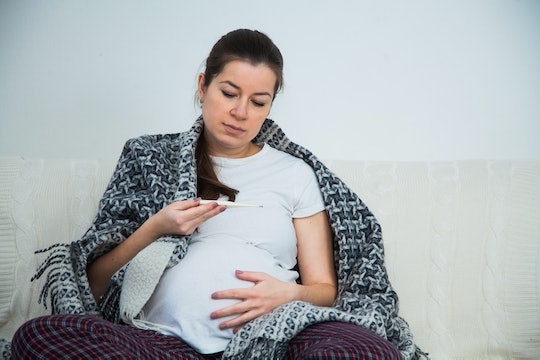 Getting Sick During Pregnancy Could Affect Your Baby's Brain, Study Says

Every parent-to-be wants to make sure they are the healthiest they can be while pregnant. You may focus on eating the right foods, staying as physically active as possible (if possible), sleeping the right amount of hours, and taking time for self-care so you're not under extra stress. But sometimes, you may be hit with a cold or seasonal allergies that just drain your body. Turns out, though, those illnesses could have implications for your soon-to-be little: New research has found that a pregnant person's activated immune system may affect their baby's brain. But don't worry, there are ways you can keep yourself healthy.

A new study published in The Journal Of Neuroscience found, when a person's immune system is activated during the third trimester of pregnancy, it might impact a baby's short- and long-term brain functioning, according to U.S. News & World Report. In particular, researchers from the Children's Hospital Los Angeles discovered that, in the first few weeks after birth, babies born to moms with elevated protein levels caused by inflammation during pregnancy showed disruption in communication between certain brain regions. When tested at 14 months old, those babies showed changes in motor skills, behavior, and language development, U.S. News reported. They also found differences in fetal heart rate during pregnancy, indicating that maternal inflammation may start to affect children before birth.

This finding fills in a missing piece. Although studies in animals have suggested it, this study indicates that markers of inflammation in a mom's blood can be associated with short- and long-term changes in their child's brain. [This] will now allow us to identify ways to prevent those effects and ensure children develop in the healthiest possible way — beginning in the womb and continuing through later childhood and beyond.

The researchers studied young women in their second trimester, through childbirth, and until their little ones were toddlers, according to ScienceDaily. The pregnant women ranged from ages 14 to 19, which the researchers said put them at an increase risk for "psychosocial stress and resulting inflammation," ScienceDaily reported.

Knowing how an activated immune system can impact a baby's development may give doctors and pregnant people better insight into how and when to ward off colds, illnesses, allergies, and other triggers. And there are many ways you can boost your immune system so that you are protecting you and your baby's health and growth.

First and foremost, parents-to-be should eat foods that can fight off the flu and other illnesses, according to SheKnows. That means a diet rich in whole foods, such as fresh garlic, green leafy vegetables, and fresh citrus, as well as drinking lots and lots of water. Experts who spoke to SheKnows also recommended eating a diet high in protein (think chicken, pork, eggs, and cottage cheese), and fatty acids (think nuts, seeds, and flax seed oil). Stay away from fried and greasy foods, of course.

Taking probiotics is another way you can boost your immune system. Modern Alternative Pregnancy suggested adding yogurt, water kefir, kombucha, fermented pickles, sauerkraut, or milk kefir to your diet to get a good dose of healthy bacteria in your body.

Beyond foods, pregnant people should consider loading up on vitamin D and vitamin A, according to Modern Alternative Pregnancy. You can get this by spending at least 15 minutes in the sunlight, if possible, or taking supplements such as cod liver oil.

Those are just some of the ways you can boost your immune system to avoid inflammation, and help your baby's development. But don't fret if you get sick; sometimes we simply can't avoid it.