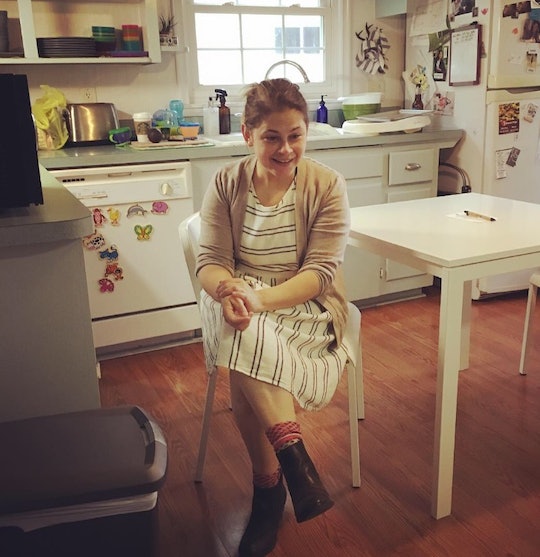 The Striped Dress That Saved Me Postpartum

Before I had a baby, I lived in dresses. I had been a major tomboy early on in life, but in my 30s I fell in love with feminine clothing. For the first time, I loved pastels and soft fabrics like satin and silk. I loved the feeling of my legs encased in tights and accented by ankle boots with kitten heels, which felt like they were lifting me up into the air. I wore dresses everywhere — to the grocery store, or to the dog park.

Because so much of your body is hidden underneath the fabric, dresses are more forgiving than other types of clothing: you're able to hide most bodily changes, such as weight loss or gain, without alerting the masses. For this reason, I was able to wear my non-maternity dresses throughout my entire pregnancy. Sure, my belly lifted them up more and made them shorter, which meant I had to wear solid leggings underneath instead of tights. But for the most part, I was able to stay in my "normal" clothes instead of having to buy new maternity clothes, which made me feel pretty cute, even while I waddled through rooms.

Then I had the baby, and everything changed. I came home, injured both on the inside and the outside: I’d had an emergency C-section, so I had some stitches to work around. I felt like a ghost, because I was exhausted and totally unable to recognize who I now was. But there was one dress that made me feel like myself again after I gave birth.

For the first few weeks after I came home from the hospital, I wore giant yoga pants with the thickest waist bands ever. They spread across my soft, scarred body, concealing my wound.

My body didn’t feel like mine. I was in pain constantly, and I still looked pregnant, because my belly was still swollen. I would stand in the kitchen and watch the room spin. How did I get here and where did I go?, I'd ask myself. It felt like I would never see the old me again.

It was my postpartum dress, meant to be worn during a period of time when I felt like a shadow of my former self.

When the time came to return to work two months after I gave birth, I realized my wide-waisted cotton pants wouldn’t be returning with me. They had pilled so much that there were clusters of fabric dancing atop them. Merely glancing at them made me visualize sitting at home on the couch, feeling sorry for myself. I needed to look presentable. I needed to feel presentable. So I went shopping.

I didn’t enjoy my shopping time. The scale hadn't moved an inch since the day I went in for delivery, and I wasn't happy about having to size up. I also felt guilty for being out of the house and away from my baby. I grabbed things off the rack haphazardly: solid colors, a lot of black. I spent $250 trying to find clothes that made me look somewhat as I had looked before. I chose more forgiving fabrics and cuts: a linen blend for pants, cotton-poly shirts that wouldn't cling to my body.

An Old Navy babydoll dress caught my eye. (The dress is currently out of stock, but you can buy it in various sizes on eBay.) It was a creamy white cotton dress, with navy blue horizontal stripes on the bodice and stripes running the length of the skirt. It definitely had a nautical vibe. It had a white lining attached to the outer layer, so that the layers would always move together. There was safety in layers. It almost seemed like something that my pre-pregnancy self would have worn. And it was on sale, so the decision was made for me. I took it home and waited for the right time to wear it in public.

I put on my pre-pregnancy shoes and walked around and felt the air underneath me again. Even though I was still 25 pounds heavier than I was before giving birth, I felt light as a feather.

The right time was a few days later. And then the next day, and two days after that. I swapped that dress out roughly every 48 hours. I put on my pre-pregnancy shoes and walked around and felt the air underneath me again. Even though I was still 25 pounds heavier than I was before giving birth, I felt light as a feather. I felt like the girl I’d been was still inside me. That dress changed a lot for me.

Even though I felt great in the dress, that didn't change the fact that I didn't feel great about myself. Sure, the dress played angles well, but it felt more like a transitional dress, a bridge between my past and present self, than something I would actually wear all the time. It was my postpartum dress, meant to be worn during a period of time when I felt like a shadow of my former self.

Two years after I bought the dress, I decided I needed to move on completely. I slowly started phasing it out of my wardrobe. Each time I'd reach for it, my hand would pull back. It just didn't feel right anymore. I think that's because the dress reminds me of how I felt right after I gave birth, with a body that I kept expecting to morph back to its pre-baby state.

My body is still not back to its pre-baby weight, but it's slowly inching that way. I still don't look good in my pre-baby clothes, but I've started putting them back on anyway, because I'm determined to remember how I used to feel.

Like all good things, my time in the dress came to an end. A few weeks ago I packed it into a bag to take to Goodwill. There was a part of me that wanted to keep it, but the bigger part of me wanted to send it off. It once served me, but it no longer does. And there is so much strength in letting go.