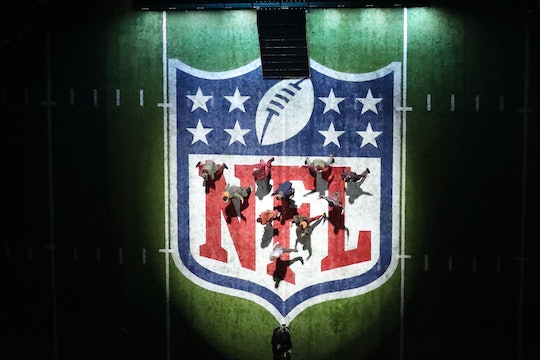 Here's A Breakdown Of The 2019 Super Bowl Halftime Show Controversy.

For both football players and musicians alike, the Super Bowl is the biggest stage America has to offer. But in 2019, one part of the equation that makes the entire Super Bowl experience is wavering, as the event had been struggling to find artists willing to bring spectacle and drama to the halftime show. Actually, there has been plenty of drama, and here’s a breakdown of the Super Bowl halftime show controversy.

Things are all centered around the quiet protest that Colin Kaepernick started in 2016 when he was a member of the San Francisco 49ers, according to USA Today. You may recall that Kaepernick chose to remain seated during the national anthem during a preseason game, according to SB Nation, which the media and other players picked up on, quickly. At the time, the quarterback told NFL Media, “I am not going to stand up to show pride in a flag for a country that oppresses black people and people of color.” Other players joined his protest, igniting waves of both support and criticism.

But how does that affect the halftime show? While music artists have made gestures of support for the protest, according to Business Insider, the halftime show has remained largely absent from the controversy... until this year.

With Atlanta as the choice for this year’s Super Bowl, USA Today noted that this year’s halftime show could have been a strong celebration of the city’s role as a hub in the world of hip-hop. And while it’s unclear how many artists the NFL did ask to perform, according to The Atlantic, the fact that they were having a hard time booking someone came to light last fall when a source revealed to Us Weekly that Rihanna had reportedly turned them down.

“The NFL and CBS really wanted Rihanna to be next year’s performer in Atlanta,” the source told the outlet, according to The Root. “They offered it to her, but she said no because of the kneeling controversy. She doesn’t agree with the NFL’s stance.”

That NFL's stance, which was revised in 2017, according to SB Nation, is that players are welcome to stay in the locker room during the anthem, but if they are on the field they are expected to be standing. The league did decide to hold off on fining rule breakers until more talks can be held, the news outlet reported.

Rihanna Was Just The Start

The search wasn’t easy, with Pink, Nicki Minaj and Andre 3000 reported to have declined the offer, according to Consequence of Sound.

Billboard reported that other artists like JAY-Z made their feelings known in other ways. In his song performed with Beyoncé, "Apesh*t," he wrote: “I said no to the Super Bowl. You need me, I don’t need you.”

Additionally, a source claiming to be close to Cardi B reportedly told Page Six that she would not perform during the show in support of the protests.

Maroon 5 Was The Answer

Though the halftime show headliner is usually known well in advance of even the teams playing in the Super Bowl, the NFL remained mum on the matter throughout 2018. But rumors that Maroon 5 were the pick started circulating in the fall, which led to some people speaking out against the band, according to E! News.

Amy Schumer, for instance, wrote on her Instagram: “I think it would be cool if @maroon5 backed out of the Super Bowl like @badgalriri Did. I personally told my reps I wouldn’t do a Super Bowl commercial this year.”

Additionally, a petition was posted on Change.org asking the band to drop the gig from their plans, as E! News reported.

Since being announced as this year's headliners, Maroon 5 has not commented on the controversy.

In mid-January, TODAY reported that the NFL finally officially announced Maroon 5 as the headliners, along with Outkast’s Big Boi and rapper Travis Scott. But Esquire reported that Scott faced criticism from other singers, including Meek Mill, JAY-Z and the Rev. Al Sharpton. Scott responded to the backlash by saying that he had reportedly convinced the NFL to make a $500,000 donation to social justice charity The Dream Corps, according to Esquire.

So where are things now? With the big game days away, the artists are preparing themselves for their world stage. Will they make a statement, a la Beyoncé's raised-fist Formation pose? Or just put in their performance and let the controversy continue to rage around them. Tune in Sunday, Feb. 3 to find out.