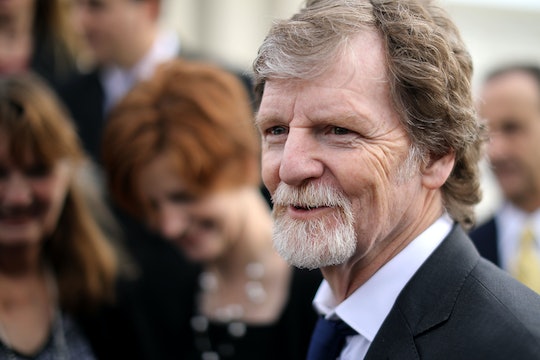 Every year, there's one or two cases before the Supreme Court that get people riled up. On Monday, SCOTUS ruled on one of them and people are understandably upset. In a 7-2 vote, the Supreme Court ruled in favor of the baker in Masterpiece Cakeshop v. Colorado Civil Rights Commission, which is more commonly known as the case of a Colorado baker who refused to make a cake for a gay couple's wedding. Justice Anthony M. Kennedy wrote the majority opinion for the court, with Justices Ruth Bader Ginsberg and Sonia Sotomayor casting the dissenting opinions.

Despite the ruling, Justice Kennedy made it very clear that SCOTUS does not support the LGBTQ community being discriminated against. Here's what he said:

“The outcome of cases like this in other circumstances must await further elaboration in the courts, all in the context of recognizing that these disputes must be resolved with tolerance, without undue disrespect to sincere religious beliefs, and without subjecting gay persons to indignities when they seek goods and services in an open market.”

The case arose back in 2012, when David Mullins and Charlie Craig visited Masterpiece Cakeshop in Lakewood, Colorado with their mother to buy a cake for their wedding. Once it was apparent that the pastry was for a same sex wedding celebration, baker Jack Phillips refused to make the cake, according to a timeline of the case on SCOTUS Blog. But it was never about the cake.

Since Colorado has anti-discrimination laws for public businesses, Mullins and Craig filed a complaint with the state's commission on civil rights, which ruled in their favor. Colorado's state supreme court also ruled in favor of the couple before Phillips appealed to the Supreme Court, according to Lambda Legal. As stated by Justice Kennedy, the Supreme Court felt that Colorado's ruling was "compromised" by bias, as reported by the New York Times.

At the heart of the case were some very hefty First Amendment issues about whether or not a business open to the public can discriminate against people based on their race, gender, sexual orientation or religion. Unfortunately, this ruling didn't address any of them, as reported by CNN.

As per the American Civil Liberties Union, the court did not rule that the Constitution allows for discrimination against the LGBTQ community. Discrimination is still illegal, as it should be. The ACLU tweeted an explanation, "SCOTUS reversed the decision in Masterpiece Cakeshop v. Colorado Civil Rights Commission, based on concerns specific to the case. The Court did NOT rule that the Constitution gives a right to discriminate." The Human Rights Campaign also echoed this interpretation of the ruling, reminding people that the ruling today does not make discrimination legal. So what did it say?

Basically, it was a very narrow decision that simply found that Colorado state might have acted with bias when it first ruled in favor of Mullins and Craig. Which means that the Supreme Court still hasn't resolved the question of whether or not you can discriminate against someone because their lifestyle isn't approved by your religion. The court passed the buck on that.

All of the justices who ruled in favor of the baker essentially said as much in their opinions, according to court documents, leaving many paths open going forward to resolve these issues.

But it's no comfort to the LGBTQ community and anyone who supports human rights that the Supreme Court left these big questions about discrimination open to future litigation, despite not changing anti-discrimination laws. Its ruling means that there will likely be other couples who are discriminated against that then have to bring their own cases forward. Justice Ginsberg spoke for many who believe in equality in her opinion by writing:

Religious groups, however, argue that people should not be "forced to speak," which is something the Supreme Court has long supported, according to The Washington Post. Phillips' supporters also believe that someone should not have to go against their principles to make a living. The baker said in an interview with ABC's The View last year, "I don't believe that Jesus would have made a cake if he had been a baker."

LGBTQ rights groups, such as the Human Rights Campaign, have argued that a ruling for Phillips undermines the 2015 Supreme Court ruling guaranteeing a constitutional right to marriage and would essentially be a "license to discriminate." Craig's mother, Deborah Munn, who was with the couple that day told NPR last year that the car ride home was awful. "I could see my son's shoulders were starting to shake; he had broke down and he was crying. I could not believe that a business owner, someone who makes pastries, could simply turn someone away because of who they are," she said.

This ruling might not technically be that license to discriminate, but it does leave a lot of unanswered questions for the LGBTQ community. Expect to see a lot of signs about cake at Pride parades this month.

Editor's Note: Romper has updated this article to clarify the SCOTUS ruling, as written by Justice Kennedy.