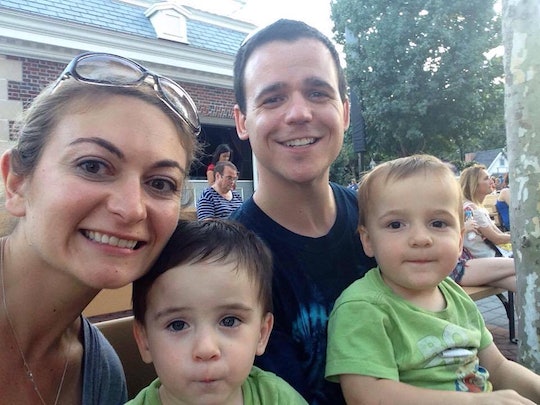 The Surprisingly Small Thing That Helped Save My Marriage

As millions of Americans were getting comfy on their couches watching the opening number from this year's Tony Awards, I was giving a performance of my very own. Right around the time James Corden took the stage, I locked the bathroom door, buried my face in the Elmo towels still damp from my sons' bath an hour ago, and sobbed.

I wasn't crying because I feared Hamilton wouldn't win the awards it deserved, or because I wished Neil Patrick Harris were hosting instead. I was having an adult temper tantrum because watching the Tony Awards was one of my favorite activities to do with my husband, since we first started dating a decade ago. But instead of watching it, we were stuck doing our new nightly activity: fighting with our three-year-old twins over going to bed. Because until my husband and I decided to establish firm bedtimes for our sons, our marriage suffered.

I'm not sure how bedtime became such a free-for-all in my house. Although we had started out with a strict "bottle at 7 and we'll see you in the morning" schedule, that started to shift right around when the boys turned two, when they stopped drinking a bottle before bed. Because there was no longer anything anchoring us to the start of a bedtime routine every night, they started going to bed whenever they felt like it.

Our boys are early risers who like to wake up with (and sometimes before) the sun. Back then, they weren't in preschool or daycare, so they didn't have to be up at a certain time. When my best friend told me that her son, who's the same age as my own boys, goes to bed around 8:30 and sleeps until 8 the next morning, my partner and I thought that perhaps if we allowed the boys to stay up until they were tired, they too would start waking up at a more reasonable hour. But that never happened.

The boys were happy to stay up until 8:00, 8:30 or even 9:00 p.m. on some nights. But even though they were going to bed later, they didn't end up sleeping later as a result. They still woke up with the sun, even on the weekends. As a result, instead of getting a bit of a lay-in on the weekends, my husband and I had to stay up with our sons during their extended evening hours, which put a real strain on our relationship.

Once the boys finally fell asleep, we didn't talk much or spend any quality time together. We were either too busy trying to accomplish the chores that had to be done before we went to bed, or we were still too angry at each other for things we had said earlier. There just wasn't any time for us to work on our relationship.

Because we never knew when they would finally fall asleep, it was hard to do the adult tasks around the house — the things I loathe doing anyway, but are much easier to do without the boys underfoot. My partner would try to distract them with a book in the evenings while I ran the vacuum or wiped down the bathrooms, but they'd always manage to find their way upstairs to spray themselves in the face with the cleaner or tangle themselves in the vacuum cord. If he was folding laundry and I was supposed to be playing blocks with them, they'd knock over a pile of freshly cleaned clothes or dump out the basket to play "boat."

Obviously, they were just being typical toddlers, but their behavior left my partner and I sniping at each other over chores. We were resentful of the fact that we couldn't get anything done until after the kids fell asleep. Once the boys finally fell asleep, we didn't talk much or spend any quality time together. We were either too busy trying to accomplish the chores that had to be done before we went to bed, or we were still too angry at each other for things we had said earlier. There just wasn't any time for us to work on our relationship.

Bedtime had become this huge, exhausting ordeal, to the point that we had no energy left for each other by the end of the night. Most nights, we fell asleep before we could even decide on a movie or TV show to watch together. Sex happened, but it was rare, more like a surprise occurrence when we happened to bump against each other during the night and remembered what those parts of our bodies were for. We still loved each other, but our kids' bedtime routine (or lack thereof) was slowly sucking our souls away.

The morning after the Tony awards, after we'd had our coffee, scrolled through the list of winners, and promised to wait for each other to watch any of the performances on YouTube, I made a suggestion.

"I know we want the boys to sleep in later," I said. "But maybe it's time to admit that they're never going to be kids who sleep past 6:00 a.m. Maybe we should try setting an actual bedtime, an early one, so we have some time to ourselves in the evenings." My partner was totally on board.

It took about three weeks for the boys to get accustomed to their new routine, but before we knew it they were asking us to go to bed at their bedtime, "when the little hand is on 7 and the big hand is on 6." We started a bedtime routine to help them settle down at night: a quick bath, following by brushing their teeth, picking out their pajamas, and reading them one story. The sense of defined order calmed them down, to the point that we no longer have to go in their bedroom and tell them to quiet down and go to sleep. They still wake up early in the morning, dragging me to the window and screaming, "the world is waking up, Mommy!," but since they're going to bed nearly two hours earlier, they're getting more sleep, and they're sweeter and more well-behaved as a result.

Having the time to do the things we love makes us happy, and we're kinder to each other now than we were before.

But what's even better than the fact that our kids no longer act like gremlins after 5:00 p.m. is the impact setting a bedtime for our kids has had on my relationship. Raising preschoolers is hard, but knowing when our shift will be over helps us be more patient with each other and with the kids. We're better able to plan getting things done around the house, since we know how much time we'll have to do things once the kids go to bed. We have more time to work out and relax. He plays video games. I knit. Having the time to do the things we love makes us happy, and we're kinder to each other now than we were before.

Now that the kids have a set bedtime, we plan at-home date nights on the weekends for after they're asleep. We have a snack while they eat their mac and cheese, and once they're down for the night we order in takeout from a place that doesn't have a kids' menu and watch a movie together. Instead of spending the nights pacing back and forth in front of the boys' bedroom trying to make them go to sleep, we have time to actually talk to each other again.

During my first few years as a parent, I've learned that part of parenting is about admitting when something isn't working and not being afraid to change tactics. It may have cost us this year's Tony Awards, but I realize now that establishing a set bedtime for my kids pretty much saved my marriage.