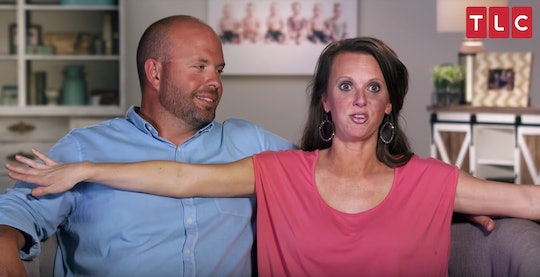 Luckily, they found a (very) family-friendly restaurant where multiple servers expertly handled their table. The staff wasn't remotely shy around the babies and even sweetly offered to help transfer the sextuplets into high chairs and arrange them around their parents. They were also lightning quick with a dish towel when one of the babies toppled a water glass on the table, scooting the babies around and sticking them right back when they were finished. (Eric and Courtney did eventually manage to place an order, and even that was met with polite "ma'ams" and "sirs" from the staff.) And did I mention that all of this just so happened to take place on Valentine's Day?

Needless to say, Courtney and Eric had very different ideas about what a romantic V-Day activity might be, but Courtney's date night proposal won in the end.

"With Valentine's right around the corner, we would usually celebrate as a couple," Courtney explains in the exclusive sneak peek above. "But we've never taken the babies out to eat before, so hey, what better time than to do it now? We're going to celebrate Valentine's Day as a big happy family of 11."

"That sounds like a mommy decision," Eric quips, chuckling and shaking his head. "That's not a daddy decision."

Courtney insists that it sounds like fun to her, but Eric shoots back, teasing his wife, "It sounds like punishment. What did I do, baby, to deserve this?"

The strategy definitely tested their communication, since Courtney would spot a baby in distress on Eric's side and have to quickly verbalize to him who needed help and how. But the biggest hurdle was simply not having enough hands to catch a baby about to fall out of their high chair, while preventing another baby from choking on something, while snatching sharp utensils away from another baby, while explaining to the older boys that yes, the taxidermied animals on the wall were once real, but aren't real anymore. Of course, Eric and Courtney handled it all with a good sense of humor. And with their first family restaurant outing on the books, it's bound to get easier from here on out. Maybe just make it a double date with another couple next Valentine's Day?