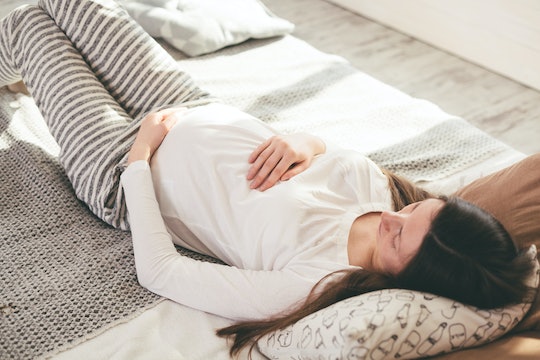 As a kid, I was obsessed with twins. I basically spent my entire childhood disgruntled that my sister and I were two years — not two minutes — apart, and I dreamed of the day when I would become a mom of twins. That wasn't in the cards for me, but I'm lucky to have several twin mom friends and I love to hear their stories. Incredibly, I've learned from them that their babies' bond began even before they took their first breath. The entire relationship is amazing, but the sweetest thing twins do inside the womb will seriously make you melt.

Researchers at the University of Turin and the University of Parma in Italy found that twin babies begin reaching for their sibling at 14 weeks gestation. The scientists concluded that twin fetuses are aware of one another's presence and take an interest and comfort in their familiar neighbor. This begins even before fetal sense of hearing develops, so a twin's very first experience of anything outside of his own being is the life of his brother or sister. Amazingly, the researchers found that by the 18th week of pregnancy, the twins spent more time touching their sibling than themselves.

The study revealed that a whopping 30 percent of fetal movement was directed to the other twin at 18 weeks (the other percentage measured was the movement directed at the uterine wall). And not only that, but the physical touch directed at their little neighbor actually lasts longer than when they touch themselves. So an in-utero twin will spend a longer time stroking her sibling's head than touching her own face.

Any twin mom will tell you she has no trouble believing the research findings, because sonogram appointments often feel like sitting in on a private baby play date. Mother of toddler twins Alyson Thomas tells Romper her son and daughter had a defined relationship even before birth, and they've stuck to it ever since.

"One sonogram she would be breech and the next she would be head down," Thomas remembers of her daughter. "She loved grabbing her ankles and pretty much took all the space. Most pictures of our boy came complete with her butt on his head. On the other hand, he stayed head-down the entire pregnancy. Towards the end, because there was no room, he would wrap his toes on my ribs. And 19 months later, they are still the same. He is super chill and she rules the roost!"

Brittany, a mother of twin four-month-olds in Texas, tells me she had the same experience. "Oh yeah, one of my girls was definitely the 'Alpha' right from the start. Their personalities in the womb actually affected the way we chose each of their names, because it was so pronounced." Immediately after birth, Brittany's daughters slept best when nestled cozily right up against each other. They weren't as comfortable when separated, she observed, so she committed to keeping them together as much as possible. I guess when you've had a snuggle buddy for nine months, it's pretty hard to give them up.

All the families with twins that I know make no pretense about it being easy; any parent of a singleton can imagine the extra stressors that would necessarily come from having double the number of babies. But it cannot be denied that the bond between twins is remarkable and one of a kind, and there's nothing more gratifying as a parent than knowing your children love and care for one another.

It doesn't look like I'll ever realize my childhood dream of having twins, so I'll have to be content to ogle over those my friends have instead. Because everyone knows the only thing better than a newborn baby, is two newborn babies.

More Like This
22 Valentine's Day Pregnancy Announcement Ideas Sweeter Than Candy
Fun, Sexy Maternity Lingerie, For When The Mood Strikes
30 EXtraordinary Girl Names That Begin With X
Can Dogs Sense Labor? 5 Signs Something Might Be Up
What Parents Are Talking About — Delivered Straight To Your Inbox