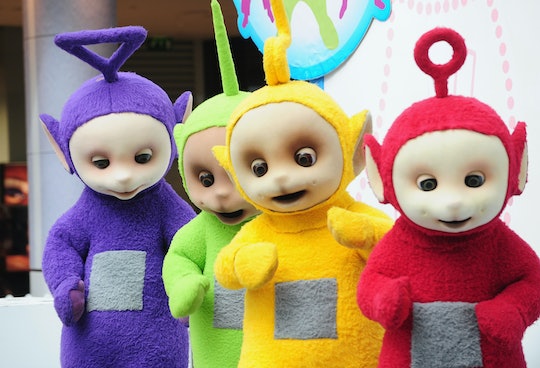 Remember the Teletubbies, the popular (if slightly odd) ‘90s British show for kids? Well, our little alien friends Tinky Winky, Dipsy, Laa-Laa, and Po have returned. That alone is probably great news for adult fans of the show (not to mention for a whole new generation of infants), but there’s more, you guys. Like so many of us who flourished in the '90s, the Teletubbies are now living with the noise and chaos of having little ones around. It looks like the Teletubbies might have had babies, and everyone is freaking out.

In case you missed the Teletubbies boat 20 years ago, here is a quick refresher on the rather distinguishable creatures. Tinky Winky, Dipsy, Laa-Laa, and Po are four funny, fuzzy creatures with antennae on their heads and televisions in their stomachs who live in a massive bunker and get into all kinds of cute antics. At its height, the show rivaled Sesame Street and Barney in terms of popularity, TIME magazine reported.

Now, the Teletubbies will be joined by eight Teletubbies babies, called the Tiddlytubbies (naturally). According to the website, Daa Daa, Baa, Ping, RuRu, Nin, Duggle Dee, Mi Mi, and Umby Pumby each have their own distinct color and personality. And very distinct, on-brand, names.

The babies even have their own little nursery area in the Home Dome, where the four Teletubbies visit to play or just to watch the babies nap.

That all sounds pretty adorable, but the idea that the Teletubbies might have procreated has caused panic on Twitter. People are grappling with the basics of just who the babies are and where they came from. Did the Teletubbies couple up? Are they officially adults now? The questions just keep coming.

Do we need to mix colors to figure out who's who?

And then, there are the big questions: “Have the Teletubbies been pregnant this whole time? Are there alien pods somewhere in the Home Dome? And why? Why in the world is this happening to us?”

But the biggest point of confusion for fans is whether the Teletubbies are parents at all. It’s actually not clear whether the Teletubbies’ eight tiny co-stars are meant to be children, siblings, or friends of the original four. The official website for the show is silent on the exact connection between the smaller ‘Tubbies and the bigger ones.

Questions of parentage notwithstanding, the Tiddlytubbies are pretty darn cute, even if they’re causing an existential crisis for fans.

New episodes of the Teletubbies reboot can be found on Nick Jr. And if the news that the ‘Tubbies might have linked up means you need to binge-watch all of the old episodes again (no tele-judgement), you can find them on Amazon Prime and BBC online.