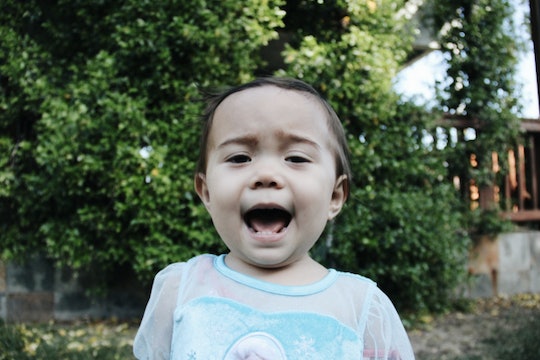 The Terrible Twos Haven't Been Awful — They've Been Awesome

My daughter just turned 2, but she’s been exhibiting the “terribleness” associated with toddlerhood (aka the Terrible Twos) for a while now. Just the other day, we were making a quick pit stop (“quick” — yea right!) at Trader Joe’s when she asked for water in her little cup. I gently told her no, they didn’t have a water fountain, and handed her a sippy cup already full of water. Her response made the temperature in my body skyrocket to embarrassing degrees as she squealed at the very top of her tiny lungs and cried, “NO, I NEED WATER IN MY CUUUUUUUUUUUP!” She gave young Mariah Carey a run for her money with her impromptu performance, and I could feel the shoppers around us avoiding eye contact and secretly judging my parenting skills as we strolled through the produce section. My little 23-pound 2 year old can turn into the Incredible Hulk at any given moment without the slightest care about where she is or whom she’s with. She sucks the life out of me and my partner, and then some. Yet oddly enough, our hearts grow fonder of her as each day passes.

As weird, erratic, and socially awkward toddlers are, there’s a reason behind their savage behavior. Toddlers are learning how to navigate the world and assert their independence, and in doing so, are experiencing the intensity of their emotions for the first time. This can be pretty overwhelming. As they learn how to cope with their feelings, they go from extremely high as a kite, to a screaming and kicking low, in only a matter of seconds. Dr. Harvey Karp, pediatrician and author of The Happiest Toddler on the Block explains the barbaric behavior of toddlers to WebMD: “We become less eloquent, less patient, less logical. We call that 'going ape.' Toddlers start out 'ape,' and when they get upset, they really go ‘Jurassic’ on you. They turn into these primitive little cavemen." So my toddler is crazy, yes. Unusual? No. But she sure does drive us bananas on a daily basis.

My daughter wakes up at the crack of dawn every morning with an agenda, it seems, to exert as much energy as possible until she crashes. She’ll get up, jump on our bed while my partner and I are still asleep, and then escape into the living room to do who knows what. By the time one of us stumbles out of bed, we turn on the light to find that a hurricane has spun through the house, tossing crayons and blocks all over the floor, ripping up book pages, rearranging couch cushions, and undressing dolls. It’s utterly amazing how much damage she can do in less than one minute. The rest of the day is a cycle of destruction, with feeble attempts to make the house look presentable until I give up and succumb to the disaster.

When she does sit quietly still and the sound of footsteps and murmuring die down, it usually means something mischievous is happening. Yesterday, I found her putting baby wipes in between pages of her books, completely wasting an entire container of wipes I just bought, and soaking through the pages of her book until they turned to mush. Two weeks ago, she found my keys and attempted to “unlock” all the doors in the house, leaving scratches on the walls and doors surrounding the knobs. Don’t even get me started about what happens when she disappears around the corner with a crayon. Sometimes I secretly sit alone in the quiet for an extra moment, soaking up the silence knowing that I will inevitably enter another wreckage to repair.

In addition to “destructive,” “toddler” should also be synonymous with “tantrum”. On any given day, my daughter throws at least five tantrums over the most unreasonable and outlandish things. At lunchtime today, she got upset when she saw avocado on her plate (a food she typically loves, but toddlers can be finicky). She told me didn’t want her avocado and flung it onto the floor, a classic toddler move. When I proceeded to throw the dirty avocado in the trashcan, she went Jurassic on me and screamed, “I WANT MY AH-OH-KAH-DOE!” and attempted to frantically dig through the garbage. Tears sprung out of her eyes, followed by inaudible yelling and thrashing limbs, and I tried my best to explain that you shouldn’t say you don’t want something and throw it on the ground if you actually want it. I might has well have explained the theory of relativity to her because she didn’t absorb a thing through her howling.

Then there are the fits she throws when she wants me to read bedtime stories with the lights off, but I can’t read in the dark because I can’t see; or when she wants to drive the car, but she can’t even see over the dashboard and doesn’t have her driver’s license, and so on and so forth. Explaining even the smallest bits of logic to a toddler feels pointless at times, especially when they’re screaming in your face for five minutes straight. There’s still the slim chance the knowledge you’re imparting on them sticks and they’ll be one step closer to being civilized. But that journey is exhausting.

Speaking of exhausting, raising a toddler really takes a toll on dear old mom and dad. My partner and I are both relatively young and energetic parents in our mid-20s. I devote my days as a stay-at-home mom to chasing her around and making sure she stays alive. You’d think we would be the perfect candidates to raise this exuberant specimen, but we have our shortcomings, too. My back aches every single day from crouching under beds to find her toys and crawling like a horsey as she sits on top of my spine shouting, “Giddy up!” My partner always comments on how sleepy he is when she wakes him up at 5:30 a.m., demanding a cold cup of milk before the sun even rises. Sometimes we fight over the last drop of coffee in the pot until we agree to just make a new one. She sucks the life clean out of us to the point where we are plain boring compared to our childless friends. Most nights, including weekends, as soon 10 p.m. rolls around and our kid is knocked out in her crib, you can find us sprawled on the couch in front of the TV half asleep with alcohol in hand. Speaking of which, you never really know the importance of alcohol and coffee until you deal with a toddler.

Yet in all her destructiveness and defiance, our toddler is an incredible gift to us. Behind that green hulk skin, there’s a little person in there that has a mind of her own. Her gears are ticking at a rapid pace, and her emotions are so intense that she forces us to stop and feel them with her. Adults have already learned to cope with the highs and lows of life to the point where we brush our emotions away, and even ignore the plight of others. But I’m reminded of how sweet the innocence and simplicity of life can be through a toddler’s eyes when my daughter hears me yelp in pain when I stub a toe and stops what she’s doing to give my leg a kiss. She may be the closest thing to a primitive ape, but she demonstrates a heartwarming human connection that I have long forgotten.

She feels her anger and sadness so strongly, but along with her hellish tantrums come a heightened sense of joy that is so infectious it gets even strangers excited. I’ve never seen anyone fangirl as hard as my daughter whenever she sees Elmo or Curious George. She gets super stoked at the grocery store when she can place items on the moving checkout belt. Buttons excite her to no end — elevator buttons, remote control buttons, buttons from obsolete cell phones  — she’s just one press away from sheer happiness. Even though she gets pissed pretty often, the bizarre and mundane things in life can still please her.

Life through a toddler’s eyes is one hell of an emotional roller coaster, but the highs are well worth the lows. When she finally goes to bed at night (not without another epic breakdown, or four) the peaceful stillness on her cheeks is almost too hard to believe. She provides so much excitement and adrenaline day in and day out; I almost want to poke the sleeping beast awake just to keep me on my toes a little longer. In the brevity that is toddlerhood, part of me already feels nostalgic for these high-energy, extra-cuddly days. I’d hate to see the simplicity of life through her eyes chip away, and I’m already secretly stashing away the memories of her kisses and tantrums in my heart. So yes, she’s a primitive creature who blows everything out of proportion, but it’s so worth the love and happiness she’s returned to everyone around her.