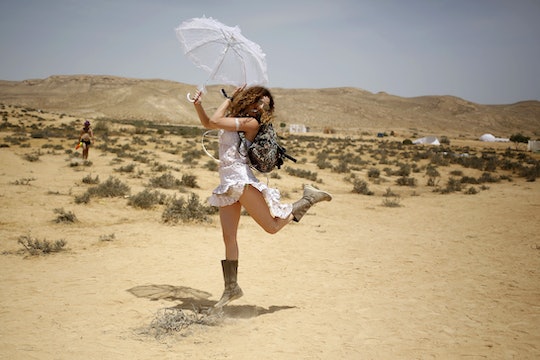 There always seems to be the same old trope in a rom-com every few years. A mom pumps her breast milk, puts it in the fridge, and leaves the house — only to come back and discover that her husband (or friend) accidentally drank the breast milk while she was gone. But during this year's Burning Man, that classic joke became a reality. Believe it or not, a woman served breast milk lattes at Burning Man and people actually enjoyed them.

Yes, really. Business woman Miki Agrawal (she co-founded period proof underwear company Thinx) posted on Instagram about how she pumped during Burning Man, a festival in the Nevada desert (awesome), but then gave her breast milk to the festival attendees (say what?). Agrawal wrote all about her experience in the caption of her post, stating:

I pumped my breasts every 3 hours at Burning Man and gave away most of my milk. Some people downed a whole four ounces hoping for a hangover cure. Some wanted to try it for their coffee to make lattes. So many were curious and excited to try it. I drank some too when I ran out of water, it tastes sweet, like coconut milk! So many people told me that they had no idea that I had to keep pumping every three hours because they didn't know that breasts would become engorged or super painful when not pumped - nature's way of keeping mama and baby working together :)

Agrawal wrote, in an email statement to Romper:

Quite simply, I needed to pump my breasts and didn't want to go in the tiny airplane bathroom or find a corner at Burning Man to pump and then realized that there was inherent stigma in breast pumping and even breastfeeding in "public" (humans do eat in public don't they so why can't babies?) so I decided to make this my "art installation" at Burning Man (the fact that it has to be an "art installation" at all is baffling) and where my gift to the Playa was my breast milk (why waste liquid gold?).

Also, we still live in a Patriarchal system where breasts are over sexualized and made to be for the "male gaze only" so it makes sense that "our current society" sequesters women to back room closets to pump quietly because heaven forbid our breasts be useful tools to keep our children alive, that's not sexy is it?

Finally, and one of my girlfriends said it best in response to some people commenting about the "health hazards of drinking breast milk": "It's so funny to me how people have no problem (through indoctrination and marketing) drinking milk from a cow breast that has been obtained in an inhumane, filthy manner with rampant udder infections, drugs, steroids and fecal matter, yet, balk over drinking human milk from a clean, healthy source... indoctrination is powerful!".

Agrawal only recently gave birth to her son, Hiro, in early July, so it would only make sense for her to be pumping in public. That's awesome. But it's not every day that you hear about grown adults clamoring to drink someone's breast milk. But it is Burning Man and pretty much anything goes there — according to Burning Man's website, it isn't a festival but a community of people who pretty much do whatever they want during their time there.

Agrawal told The Washington Post that her breastmilk was "a gift" to "people who wanted some healing" and that 30 to 40 people tried it. "Burning Man is a place where you can try things without judgement," she said.

Fair enough. But Agrawal isn't the first person to try her own breast milk or have other people taste it. Plenty of celebrities have admitted to trying their own breast milk just to see what it tastes like. Experts do warn against people drinking the breast milk of other women. According to a 2014 story from Today, there is "no evidence" that breast milk is beneficial to the health of adults. The FDA warns that human milk could carry disease and be contaminated. And one 2015 study published in the Journal of the Royal Society of Medicine found that breast milk could even be a health hazard, according to Newsweek. The study found that breast milk has less protein than cow's milk and therefore doesn't deliver on its promised health benefits — at least for adults.

The next time you reach for a breast milk latte, consider the risks before taking a sip. But more power to Agrawal for so bravely pumping in the harsh conditions of Burning Man.