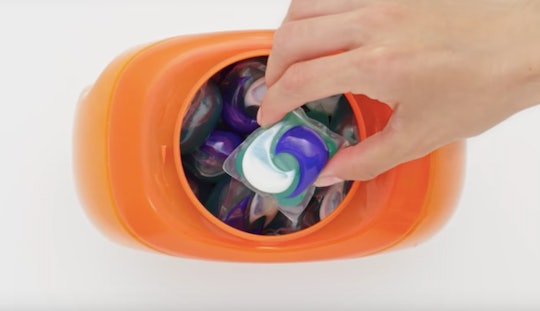 Teens Are Actually Eating Tide Pods As A Viral Challenge, & It's Super Dangerous

A new trend is causing everybody over age 25 or so to look back on their lives and ask, "Was I ever really that dumb?" According to multiple reports, teens are eating Tide Pods as a social media challenge, and it's proving to be really dangerous. Six years after they were introduced to the market, the innovative laundry packets are now being used as a viral challenge by kids on the internet, and it's important that parents know about the potential risk. In an official statement to Romper, a Tide spokesperson said:

Nothing is more important to us than the safety of people who use our products. We are deeply concerned about conversations related to intentional and improper use of liquid laundry pacs.

Laundry pacs are made to clean clothes. They should not be played with, whatever the circumstance, even if meant as a joke. Like all household cleaning products, they must be used properly and stored safely.

The American Association of Poison Control Centers receives more than 10,000 calls per year associated with laundry pod exposure, which can cause coma, seizures, pulmonary edema, respiratory arrest, and even death. Over the years, Tide's parent company Proctor & Gamble has sought to combat accidental ingestion in a number of ways, such as making the packaging child-resistant and opaque (to resist temptation), and adding a bitter-tasting agent to the outer coating. Despite the very unfunny results, the occurrences have led social media users to joke about wanting to eat them, even creating elaborately Photoshopped images of the detergent recast as a treat.

But now people are taking the joke way too far by actually attempting to eat Tide Pods, filming it, and sharing it online. CBS News spoke to one teen who admitted that "Nobody should be putting anything like that in their mouths," but hey, it got him on TV, right? Procter & Gamble told the network, "They should not be played with... Even if meant as a joke. Safety is no laughing matter."

Teens and young adults who have attempted the Tide Pod challenge don't seem to get very far, thanks to that bitter coating, but while it might foil an accidental ingestion before the outer coating gets a chance to dissolve, some who participate in the challenge are also intentionally biting into them, exposing themselves to the highly concentrated and caustic ingredients.

There doesn't seem to be a real reason for the challenge, despite the flux of submissions online, other than to possibly go viral. As absurd as the Tide Pod challenge seems, it's just the latest in a long line of really, really stupid and dangerous things that young people do to prove their "bravery." Five years ago, we had the cinnamon challenge, which dared participants to swallow a spoonful of ground cinnamon without washing it down with a drink. The trend sent more than one teen to the hospital, and medical professionals cautioned that aside from the expected choking, gagging, and vomiting (yes, that's the best case scenario), it could also lead to pneumonia, collapsed lungs, or pulmonary fibrosis, a permanent condition.

Other super viral challenges include the salt and ice challenge, which entails placing the ingredients on bare skin (the chemical reaction of this combination can cause second- and third-degree burns and permanent nerve damage), and the condom challenge, which involves snorting a condom up one's nose and pulling it out of the mouth. This, obviously, can lead to asphyxiation. But before you blame the internet for causing all this trouble, remember that teens have always been reckless; the 1993 college football movie The Program inspired more than one youth to lie down in traffic, leading to at least one death and two serious injuries. If kids take one message to heart during their teen years, let it be this: nobody is invincible, and flirting with death isn't actually cool.

The Tide Pod Challenge is dangerous, and stupid, but the company behind the product and the public are making the dangers known so enough information will be out there to deter any more teens from attempting the challenge.